This site uses cookies. By continuing to use this site you consent to our use of cookies. more info | ok
british special forces » news » sas sniper in iraq
▼ share this page

A Special Air Service (SAS) sniper has used a .50 cal rifle to take out a group of ISIS fighters inside a building in Iraq.[1, 2]

The SAS soldier was part of a team advising Iraqi forces operating in the city of Ramadi. When a group of ISIS personnel were located on the top floor of a building that also housed civilians, it was decided to use a sniper rifle to engage them, rather than with an air strike or artillery barrage.

According to the Telegraph and Daily Star, the SAS sniper used a L82A1 Barret rifle for the attack. The Barret is a semi-automatic anti-material rifle chambered for .50 BMG (12.7x99mm) rounds which are fed from a 10-round magazine.

The British sniper situated himself inside a building about a 1km away from the ISIS position and fired multiple shots into the enemy command post, the .50 rounds punching through the walls and eliminating multiple enemy fighters.

Ramadi was recently recaptured from ISIS after a security operation by Iraqi forces.

This is not the first story of SAS marksmanship in Iraq. A newspaper report from October 2014 tells of an SAS team using another .50 rifle, this time the bolt-action AW50F, to take out an ISIS vehicle convoy. Also, from August last year, the Express ran a story on an SAS sniper saving a family from ISIS fighters in Syria.[3] 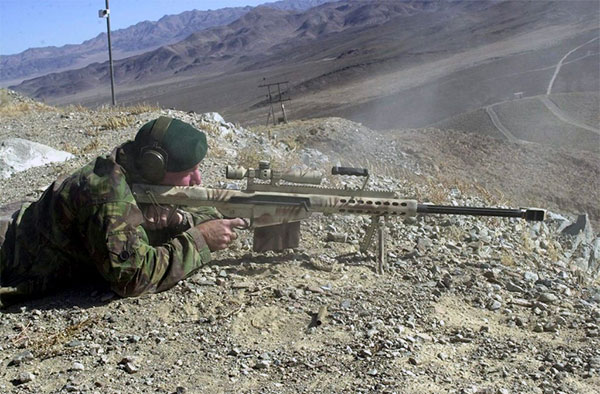 Former US Delta Force operator has some fun firing the .50 BMG Raufoss armour-piercing/high explosive/incendiary round. The Raufoss round is in common use with special operations snipers including those in the SAS and SBS.

This action by British Special Forces in Iraq is just the latest of several in recent days. The Telegraph goes on to report that 'several dozen' SAS troops are advising Iraq forces around Ramadi. These include 6 officers led by a Royal Artillery major who act as forward air controllers, coordinating air strikes in support of Iraqi ground forces. They are said to have hit numerous targets, including an ISIS bomb-laden truck which was taken out on Boxing Day.