This site uses cookies. By continuing to use this site you consent to our use of cookies. more info | ok
british special forces » weapons » javelin
▼ share this page 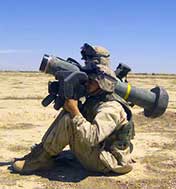 The Javelin can be fired by one man & from the shoulder if required.
photo courtesy US Army

The US-made Javelin missile has recently entered service with the UK military, replacing the Milan in the medium range anti-tank missile role.

The Javelin system offers several improvements over the ageing Milan. For one, the Javelin is a 'fire and forget' missile : once fired, the Javelin finds its own way to the target, unlike the wire-guided Milan which had to be steered. The infra-red seeker unit in the launch command unit is state of the art and a vast improvement on the Milan's MIRA sight.

The Javelin has several modes of flight including direct and an overfly-top-attack mode in which the missile arcs high then flies down onto the top of the target, thus getting around the heavy front armour of modern tanks. As with the Milan, Javelin warheads are also highly effective at taking out buildings, bunkers and fixed positions. The Javelin warhead is a 'tandem' configuration : the first shaped charge is designed to penetrate the target's outer defenses, such as reactive armour, whilst the second goes on to do further damage.

The Javelin system consists of a tripod, launch command unit (LCU) and launch tube assembly (LTA) which contains the missile itself. Javelins are usually manned by a crew of 2. A skilled crew can fire 2 rounds a minute. Maximum range is 2.5km. 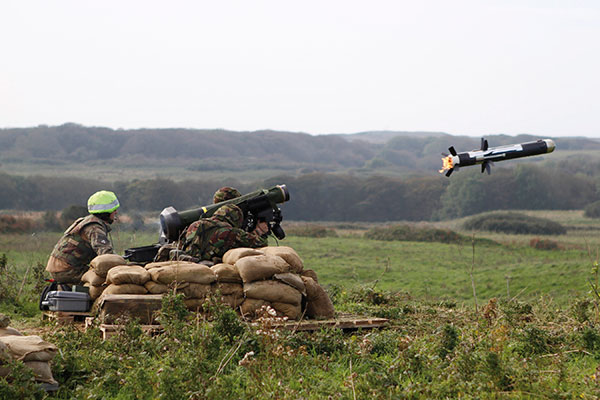 The Javelin being fired by members of the RAF Regiment. The missile is ejected from the launcher by a brief initial ignition so it can reach a safe distance away from the operator before the main rocket motor engages.
Image by SAC Lee Goddard | © UK MOD / Crown Copyright 2021
Used under Open Government Licence