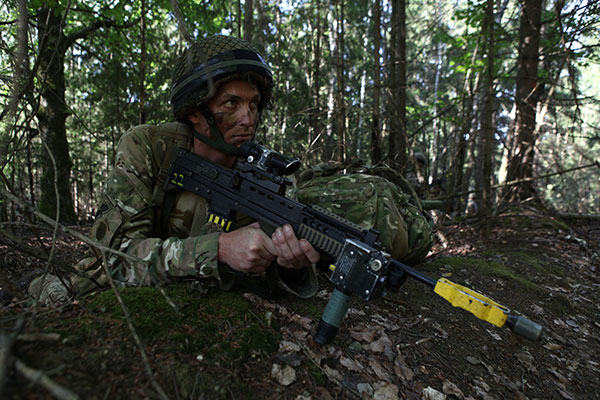 A soldier with 821 (EOD) Squadron provides security during a 16 Air Assault Brigade exercise in Germany, August 2015. During the exercise, which is part of Swift Response 2015, 16 Air Assault Brigade units, including 2 PARA and supporting elements, parachuted into action from 2 RAF C-130J Hercules. Once on the ground, they worked alongside Italian paratrooopers to seize an airfield, carry out a non-combatant evacuation operation and take on insurgent forces in the area.

821 (EOD) Squadron is a unit within 33 Engineer Regiment (Explosive Ordnance Disposal). It fields a number of parachute-trained Air Assault Troops that support 16 Air Assault Brigade operations. One of the roles of the squadron's Ammunition Technical Officer (ATO) and Ammunition Technicians (AT) is to detect and neutralise threats from improvised explosive devices (IED).