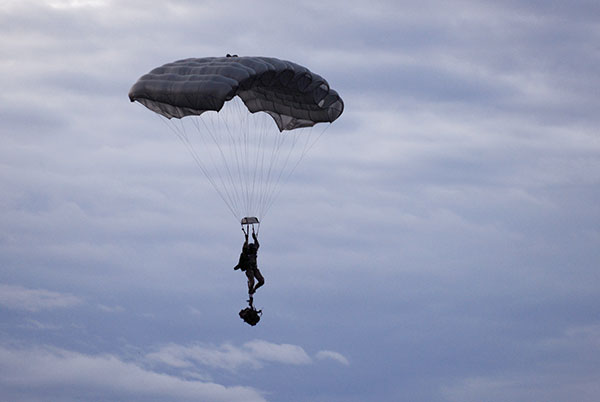 <<<39 of 44>>>^ gallery+ enlarge
A soldier with 16 Air Assault Brigade's Pathfinder Platoon descends on a BT80 multi mission parachute. The BT80 is used by specialist units including 22 SAS Air Troop and the Pathfinders. The chute features an elliptical 9-cell, 240 square-foot volume, ram-air canopy. The BT80 can be used as a tandem parachute ie it can support 2 people, with the passenger strapped to the front of the 'tandem master'.

The Pathfinder are trained in high altitude parachute insertions. Using the BT80, along with a High Altitude Parachutist Life Support System (HAPLSS), which supplies oxygen, the Pathfinders can jump from very high altitudes (up tp 25,000 ft) and either free-fall most of the way down before deploying their chutes at low altitude (HALO), or deploy their chutes at higher altitudes and glide down (HAHO). HAHO night ops allow the Pathfinders to travel a long distance from the initial glide point, making for a stealthy insertion method.

According to the book "Pathfinder: A Special Forces Mission Behind Enemy Lines" by ex-Pathfinder, David Blakeley, the PF Platoon and 22 SAS purchased the BT80 directly from its French manufacturer, replacing the GQ360 previously used.

The Pathfinder Platoon jump ahead of the main 16 Air Assault Brigade force in order to mark out parachute drop zones and helicopter landing zones.