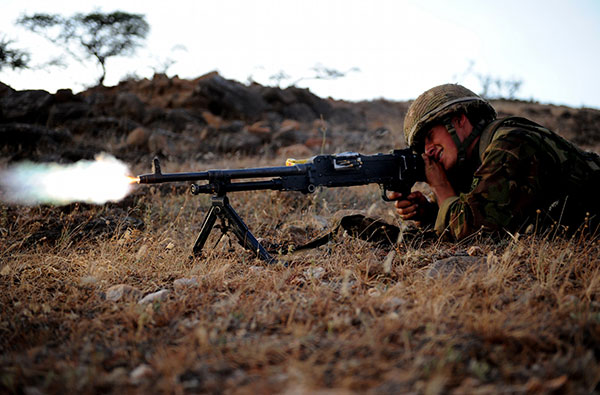 <<<4 of 37>>>^ gallery+ enlarge
A Paratrooper from A Company, 3 PARA (3rd Battalion, the Parachute Regiment) fires off a burst from a L7 General Purpose Machine Gun (GPMG) during a training exercise in Kenya, 2010.

The GPMG is belt-fed machine gun that fires 7.62mmx51 NATO ammunition. The weapon can be employed as a light machine gun and fired from a fold-down bipod, as shown here, or mounted on a tripod and used in sustained fire (SF) mode. Most regiments have replaced the GPMG with the 5.56mmx45mm LMG in the light machine gun role. The Paras and Royal Marines are among the units that still carry the GPMG on foot patrols, opting to not go without its firepower in order to cut down on weight.