This site uses cookies. By continuing to use this site you consent to our use of cookies. more info | ok
british special forces » weapons » ilaw rocket launcher
▼ share this page

The L2A1 ILAW is a 84mm unguided anti-armour rocket launcher that is designed to be carried by a single soldier. The one-shot ILAW's launcher tube is disposed of after the rocket has been fired. ILAWs have been deployed by elite UK forces such as The Paras and Royal Marines in Afghanistan and Iraq.

The ILAW has an effective range of 300 meters and minimum range of 10. When fired, the ILAW creates significant 'back blast' and operators are trained to ensure that there are no obstructions (including friendly forces) behind them in a 90 degree cone out to 100 meters before they launch.

UK forces use the CS variant of the weapon which is optimised for urban warfare and has less of a back blast. In theory the CS should be firable from within buildings.

The CS fires a projectile which can penetrate 500-600mm of armour, allowing it to knock out/disable light armour such as APCs and soft-skinned vehicles such as trucks. The ILAW is unlikely to be effective against modern Main Battle Tanks (MBTs).

ILAWs are also quite effective against bunkers, fox holes and buildings. Paras and Royal Marines have used ILAWs against enemy positions in recent actions in Afghanistan. When assaulting a building, ILAWs will often be used to punch entry holes through the walls.

ILAWs are water-proof and unlike the M72 LAW system, they do not need to be extended before firing.

'ILAW' stands for Interim Light Anti-armour Weapon and is meant to fill the gap between the LAW 80 launcher and the upcoming NLAW which will be a guided missile system. 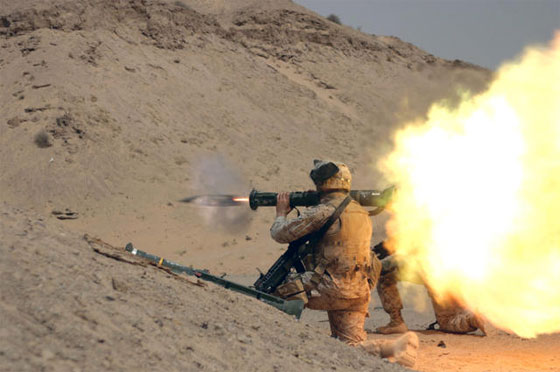 The US version of the ILAW is the M136 AT4, pictured here being fired by a US Marine. Note the back-blast emanating from the rear of the launcher.
DoD photo by: CPL ERIC R. MARTIN, USMC