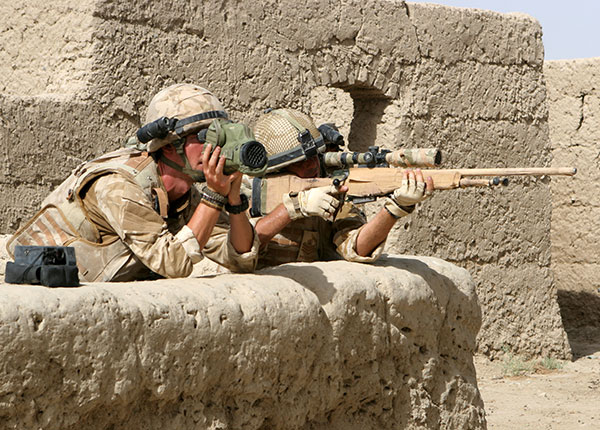 British sniper team of sniper and spotter from the Mercian Regiment pictured on operations in Helmand, Afghanistan, 2009. Note the extent to which the sniper's L96a1 bolt-action rifle has been camouflaged to match the environment. In this case, various shades of tan-coloured tape have been applied. In woodland environments, bits of foliage may be attached to webbing attached to the weapon.

The L96A1 was eventually replaced by the L115A3 .338 long range rifle, although the L96A1 was still occasionaly used by snipers, including by spotters. When the snipers switched to the L115A3, many L96a1s were given to soldiers who were badged marksman, a qualification a step down from sniper, and employed in the sharpshooter role. The semi-automatic L129A1 rifle would eventually become the sharpshooter weapon of choice.