This site uses cookies. By continuing to use this site you consent to our use of cookies. more info | ok
british special forces » special air service » sas weapons » sniper rifle
▼ share this page

The British-made Accuracy International (AI) family of rifles are regarded by many as the best sniper rifles in the world. Several variants have been employed by UK forces:

The 'Precision Marksman' (PM) was the first variant in use with the British Military. A small number of PMs were first adopted by the Special Boat Service (SBS) in 1985, then in larger numbers by the SAS. [1] The PM was chambered in 308 Winchester, a commerical cartridge from which 7.62mmx51 NATO was derived. The PM was fitted with a Schmidt & Bender 6 x 42 telescopic sight.

When the Ministry Of Defence (MoD) began looking for a replacement for their ageing fleet of Lee-Enfield L42A1 rifles - a model that had not performed optimally during the Falklands Conflict - they approached Accuracy International to make a military version of their 7.62x51mm NATO target rifle and enter into a procurement competition they planned to run. The resulting design was heavily-based on the PM, with new elements such as a a folding bipod at the forward end and lightweight polymer stock featuring an adjustable cheekpad, and monopod stabiliser. The rifle was fed from a 10-round box magazine. 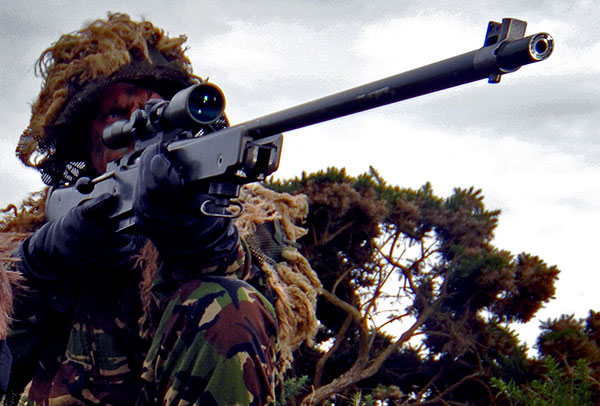 The L96 design was later improved in the Arctic Warfare (AW) version. AI developed a version of the L96 for the Swedish military who needed a sniper rifle that could operate in the extreme cold. Improvements in the resulting AW rifle include the use of polymer materials in the stock, handguards and other areas instead of the less durable and more fragile resin used in the L96. The bolt was altered to prevent it icing up and the safety was changed to a three-position design. The trigger guard was enlarged to allow for the use of thick gloves. Likewise, the 10-round magazine was given tabs to make them easier to handle with gloved hands.

A PSG 90, the Swedish variant of the Actic Warfare. The rifle is chambered for 7.62x51mm NATO.
photo by Mr Bullitt via wikimedia commons | public domain

The British would subsequently adopt the AW as the L118A1. The L118A1 was only purchased in limited numbers, for use by the Special Forces, where one of its roles was as a counter-terrorist sniper rifle.

The L118A1 is fitted with a L17A1 Schmidt & Bender MK II 50mm scope that features a variable 3-12 zoom and a quick detach mounting mechanism. Unlike the L96, which used a bespoke dovetail mount for the main scope, the L118A1 uses a standard picatinny rail. The L17A1 scope has a single rail on top for the mounting of an image intensifying night scope such as the SIMRAD KN203D. The L118A1 design also features a rail that attaches offset to the barrel to allow a STIC thermal scope to be mounted in front of the main scope. A killflash / sun-shade screws onto the end of the L17A1 scope. The killflash prevents the scope reflecting light and giving away the sniper's position while the sunshade reduces glare.

Other changes in the L118A1 include the design of the bipod. A Parker Hale bipod replaces the bespoke AI design found in the L96. This plugs in to a mounting point forward of the handguard but can also be moved to a second mounting point placed further back. This allows for the weapon to be angled up at a greater elevation, a facility useful when shooting to higher terrain or in the counter terrorism role.

Other features include a threaded barrel that can accept a suppressor. Later versions of the AW featured a folding stock and these were given the L118A2 designation.

AI developed the AWM for the international market but it was not long before British Special Forces procured a small number of the rifles. It is known in the UK military as the L115A1 Long Range Rifle. 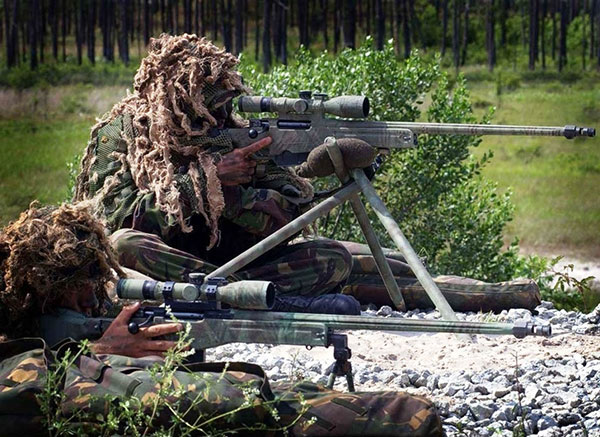 Used primarily by British Special Forces, the L115A2 variant featured a folding stock and an AI bipod in place of the Parker Hale design fitted to the A1 models.

An updated L115A1, the L115A3 entered service with U.K. forces in 2008. The A3 features a detachable sound supressor, all-weather day sights with improved magnification, as well as the provision for mounting night sights. The L115A3 was fielded by Parachute Regiment and Royal Marines snipers in Afghanistan from 2008.

Special Forces users of the L115A3 had a requirement to fire a 300 grain bullet - heavier than the 250 grain earlier L115s were built for - which resulted in AI developing the A4 model. It features a lengthened magazine and magazine well that can accomodate a 300 grain round.

A version with integrated suppressor and folding stock, the AWC, is available for use in covert scenarios. The AWC breaks down into components for carry in a special suitcase and is reportedly in use by the US Special Operations Unit, 'Delta Force', as well as the British SAS. The AWC is designed for use with sub-sonic ammunition.

The AI sniper rifles featured here are bolt action i.e. - rounds are loaded into the breech manually via a bolt lever - important as the operator can control the ejection of empty cases, a technique that helps conceal his location. The bolt-action on the rifles are designed so that an operator can reload and still keep his fix on the target through the scope.

The Special Air Service use/have used the L118A1 / L115A1/A3 in the counter-terrorist role and on the battlefield. Other UK military units, including the Royal Marines and Parachute Regiment, use both the AWM (L115A1/A3).