This site uses cookies. By continuing to use this site you consent to our use of cookies. more info | ok
british special forces » special air service » sas weapons » g3
▼ share this page

The Regiment had used full-sized G3 assault rifles in the field with great success in Northern Ireland when dealing with cars with armed IRA men onboard. These ambushes, however had been sprung from on foot. The Regiment's experience in Northern Ireland highlighted the need for a compact, automatic assault rifle chambered in 7.62mmx51mm, especially for use when operating in vehicles. The 9mm HK MP5 or 5.56mm M16s used elsewhere by the SAS were far from ideal for the task. For a brief period following the Falklands conflict, SAS vehicle teams used captured Argentine Paratrooper's FALs - weapons identical to the standard British SLR but with folding stocks, shorter barrels and an automatic fire mode.

It wasn't long before the Regiment took possession of the Heckler & Koch G3KA4 assault rifle, a cut down version of the venerable G3. Chambered in 7.62x51mm NATO, fed from 20 round magazines, with collapsing stocks and automatic fire capability, the G3 KA4 became a favourite for not just the SAS but was also carried in vehicles driven by 14 Company undercover surveillance operators.

For short-range sniping, the SAS armoury has included the G3 SG1. The SG1 variant is a standard G3 with the addition of a special barrel, bipod, ergonomic butt-stock, trigger-group and sniper scope. The SG1 has, over time, been phased out in favour of the newer H&K 417 rifle.

A further G3 variant, the highly compact MC51, is rumoured to have been used by UKSF. Nearly half as short as the full-size G3, the MC51 combined the fire power of a battle rifle in a package the size of a sub machine gun. Firing a 7.62mm-chambered weapon with such a short barrel, however, has some inherent challenges. The lighter overall weight of the gun means that recoil is harder to control than larger variants. A shorter barrel also makes recycling the weapon less reliable. Due to these issues, the Regiment dropped the MC51 for the HK53, a carbine of similar size by chambered in the more-manageable 5.56x45mm NATO cartridge. It's not believed that the British-built MC51 was ever used in anger by UKSF.

A version of the MC51 with an integrated suppressor was reportedly used for a short time by the SBS.

The Regiment used the G3 in its ambush of an IRA active service unit at Loughgall, in 1987. G3s were often given to members of SAS counter terrorist teams roled with guarding the perimeter of a terrorist stronghold. 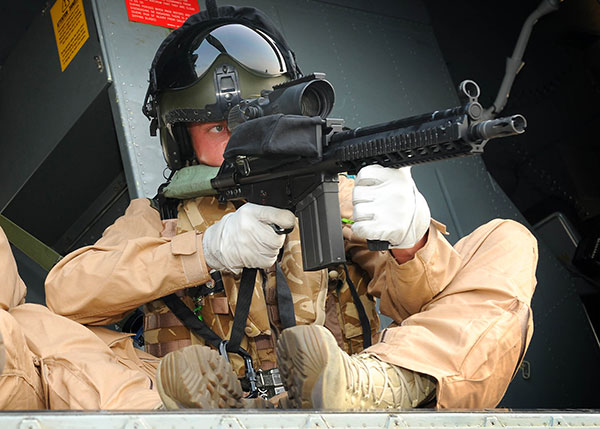 A member of Fleet Protection Group Royal Marines Maritime Sniper Team takes aim with a G3KA4. Before the take up of the L129A1 Sharpshooter Rifle, the MST used a variant of the G3Ka4 with a number of rails added for mounting scopes, grips and other accessories. The rifle pictured here is fitted with a Trijicon 6x48 scope. Note also the brass-catcher bag fitted over the G3's ejection port.
MOD photo by LA (Phot) Stuart Hill / MOD | © Crown copyright 2009 | used under open government licence