This site uses cookies. By continuing to use this site you consent to our use of cookies. more info | ok
british special forces » special air service » sas weapons » m16 & variants
▼ share this page

The M16 was an assault rifle that was in widespread use with the 22nd Special Air Service (22 SAS).

The Regiment had been using the L1A1 Self Loading Rifle (SLR), the standard British rifle since 1954, but wanted a lighter rifle with automatic fire capability. The American-made Colt Armalite AR-15 was eventually adopted to fulfil this requirement. 22 SAS were among the first military units to use the AR-15 in combat, employing Colt 602 model rifles on jungle patrols during the Indonesia–Malaysia confrontation in Borneo (1963-1966).

The AR-15 was an air-cooled, gas-operated assault rifle which employed a rotating bolt. The rifle feature a 20 inch barrel. It could operate in semi-automatic or fully automatic modes of fire. Twenty round magazines were used at first, with thirty round ones coming in later.

While the AR-15's 5.56x45mm round had neither the range or stopping power of the 7.62x51mm rounds fired by the SLR, more of its smaller, lighter rounds could be carried by each SAS trooper. For the SAS, who needed to carry as much ammunition with them as possible on extended patrols, this was a big selling point.

AR-15s were subsequently given out to other units operating in Borneo, including the Special Boat Service (SBS), and Parachute Regiment.

Over time, 22 SAS would receive further AR-15 pattern rifles, including the following models...

The Colt model 604, designated the M16 by the US military, was subsequently adopted by the SAS. The M16 had a number of small changes over earlier models. These included a smooth chrome plated bolt carrier, a captive receiver pin replacing the removable one found in the model 602, and a ridge over the magazine release button.

M16 rifle of the type used by the SAS.
US Gov photo

This model of M16 was the most common in the SAS (and SBS) inventory up until they began to wear out and were replaced with the Diemaco C7 (see further down).

A compact variant of the M16, with a 10 inch barrel, these carbines were popular among special forces units, including the British SAS. Their shorter lengths made them suitable for use in close quarters combat and operating from small vehicles. A number of Colt Commandos were reportedly carried by UKSF and units such as 14 INT in Northern Ireland. 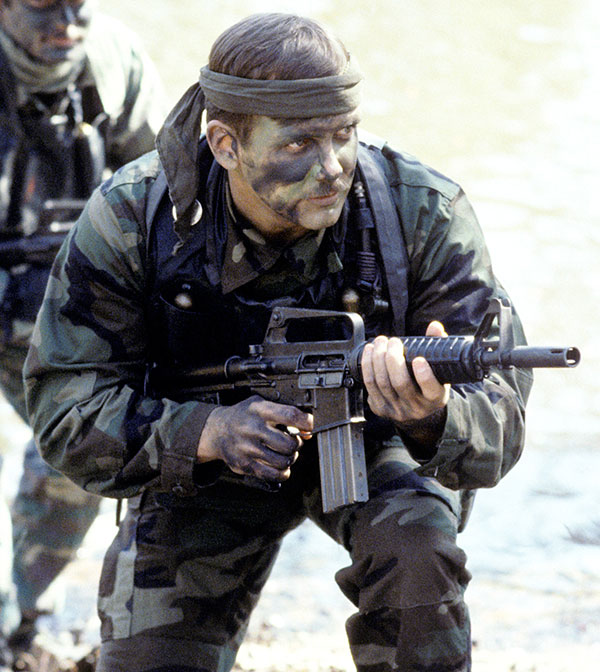 Colt Commando in the hands of a United States Navy SEAL circa 1985. A large flash hider is mounted on the end of the 10 inch barrel. The Commando features a collapsible buttstock, further reducing its length.
US DoD photo.

The Regiment's AR-15s and M16s were eventually replaced with Canadian made C7 rifles. The C7 was a Colt model 715 made by Diemaco (now Colt Canada). They were similar to the M16A2, but with the crucial difference of being configured for fully automatic fire rather than the three round burst found in the M16A2. 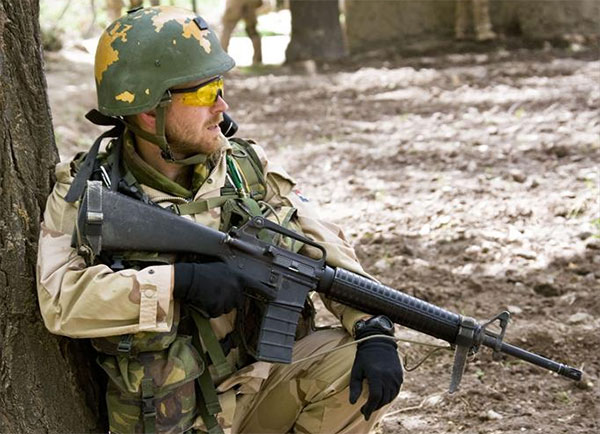 Later, when UKSF selected the C8 (L119A1) as their new primary rifle (see below), they also took up a number of C7A1 rifles. These were identical to the C7 models with the exception of a flat top receiver with rails for mounting optics and iron sights.

A C7A1 rifle with a ELCAN optic and back up iron sight mounted on the top rail.
photo by wikimedia user https://da.wikipedia.org/wiki/Bruger:Stave

In 2000, UKSF adopted the Colt Canada C8 SFW as the new Special Forces Individual Weapon (SFIW). Designated as the L119A1by the MoD, the weapon was available in two different length configurations.

The M203 is nomenclature for a M16 / C7 adapted to accept an underslung M203 grenade launcher. The 40mm high explosive grenades were a welcome boost in firepower and many SAS troopers elected to take the M203 with them on operations. 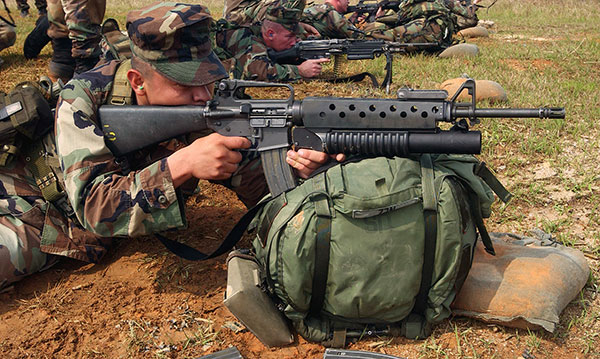 Aside from 22 SAS, AR-15 pattern rifles have been used in many other units over time. As mentioned earlier, the early AR-15s and M16s were used by many British infantry units during in the Indonesia–Malaysia confrontation.

The SBS would go on to fully adopt the rifles as their main assault rifle.

The M16 would have sporadic use by non-SF troops during Operation Banner, Northern Ireland. These included such units as Close Observation Platoons (COP).

Later models such as the Diemaco C7 would be taken up by recce units such as The Pathfinders and Brigade Patrol Troop.

The L119A1 carbine was not only adopted by the SAS, SBS and Special Reconnaissance Regiment (SRR), it has become the standard rifle of the Special Forces Support Group (SFSG) as well a number of specialist Royal Marines teams, The Pathfinders, and military police close protection teams. 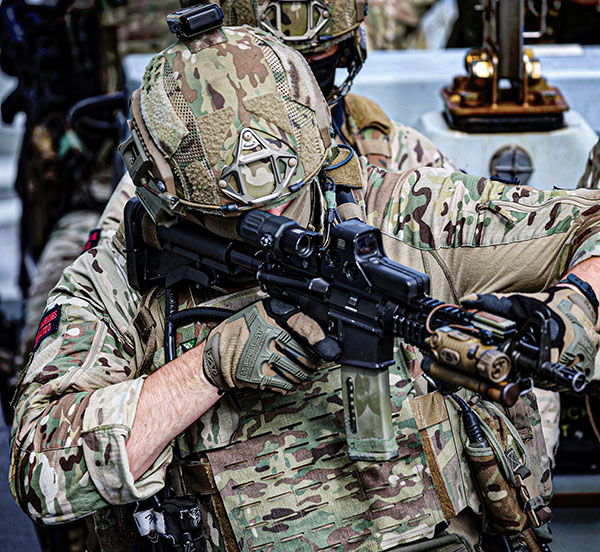 A member of 42 Commando armed with a L119A1. The Royal Marines are gradually adopting the L119A1 into more and more units.
Image by LPhot Alex Ceolin | © UK MOD / Crown Copyright 2021
Used under Open Government Licence