This site uses cookies. By continuing to use this site you consent to our use of cookies. more info | ok
british special forces » weapons » sa80a2 assault rifle
▼ share this page

The SA80A2 - Ministry of Defence (Mod) designation: L85A2 - is the standard individual weapon of the British armed forces.

Aside from the L85A2, the SA80 family of guns includes a version with heavy barrel and bipod (the L86A2 LSW), a special carbine version (the (L22A2) ) and a version with an underslung 40mm grenade launcher (UGL). There is also a single fire, manually-operated version of the rifle for cadets, the L98. All these weapons fire L2A2 ball or L1A2 tracer rounds.

The SA80 is a bullpup design, i.e. the action is to the rear of the trigger group. It uses a short-stroke gas piston system and fires from a forward-locking rotating bolt. Fire modes are single-fire and fully automatic.

The SA80A1 assault rifle (L85A1) entered service in 1985, replacing the venerable L1A1 SLR (7.62x51mm NATO) as the British military's standard assault rifle. Chambered in 5.56x45mm NATO, with a magazine capacity of 30 rounds, the SA80A1's ammunition was less powerful but lighter and easier to carry in high quantities than its predecessor. Most front-line SA80A1s were fitted with SUSAT (Sight Unit Small Arms, Trilux) scopes, with 4x magnification, making for an accurate, albeit heavy weapon. 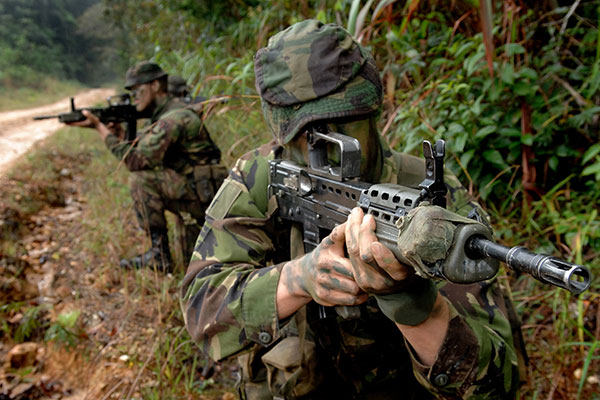 Non-infantry role soldiers were issued SA80s with a set of iron sights fitted instead of scopes liek the SUSAT. Infantry sections carry a number of sets of iron sights to replace inoperable scopes if needs be. Troops training or operating in environments like the jungle, when engagements at close range are the norm, might opt to run with iron sights rather than a magnified scope.
Image by SPO (PHOT) Dave Husbands | © UK MOD / Crown Copyright 2008
Used under Open Government Licence

Once fielded, it wasn't long before some problems became apparent with the L85A1. design. Soldiers found that magazines would sometimes drop out of their rifles without warning. The weapon was also prone to jamming. Use of the weapon in extreme climates showed up further shortcomings. Some of the plastic components of the gun would freeze, melt or break. In operations in Sierra Leone, 2000, members of the Pathfinder Platoon discovered that the safety catches on their SA80s failed in the heat, making their weapons useless. The SA80 is also a heavy gun, 1kg heavier than comparable 5.56mm assault rifles.

The L85 was trialed by the SAS and SBS but neither unit found it suitable, preferring to use the M16 family of rifles. UKSF may still use the L85 when they need to look like regular forces.

In the early 2000s, the L85A1 was extensively modified by Heckler & Koch, the result being the SA80A2 (L85A2). The A2 addresses some, if not all of the shortcomings of the A1 and has been successfully taken to war in Afghanistan and Iraq.

Whilst elite units such as the Paras and Royal Marines are assigned the L85, when they get the chance they also prefer to use C8 SFWs. M16a2s or C7s, as demonstrated by their use by the Pathfinder Platoon and Brigade Reconnaissance Force. 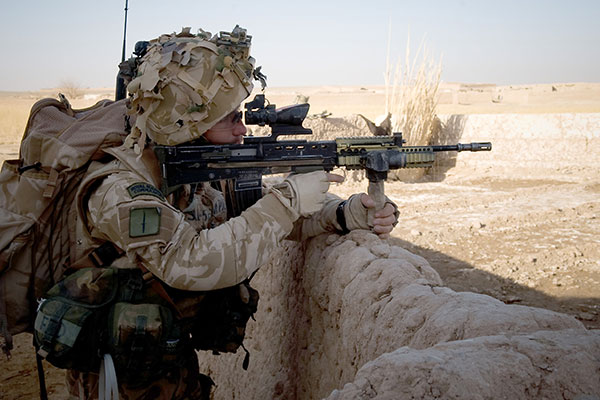 A Royal Marine from 42 Commando takes aim with a SA80A2 while on an operation in Afghanistan. During 2008 many fielded SA80A2s were augmented with a number of additional design features such as a 4-sided RIS rail for the mounting of grips and illumination devices. In some cases the standard SUSAT sight was replaced by a Trijicon ACOG sight.
US Dod photo by Cpl. John Rafoss 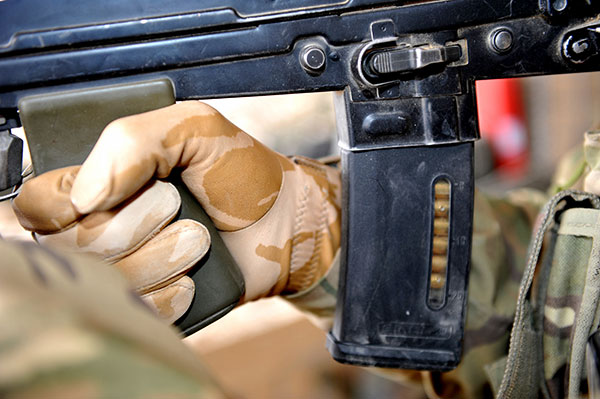 Closeup of a paratrooper with 3 PARA's L85A2 fitted with a Magpul EMAG 30-round magazine. Made from polymer plastic, the EMAG is is lighter and sturdier than the standard metal magazine. They also feature a clear window that allows the user to see with a glance how full the magazine is. EMAGs have been used by British soldiers in Afghanistan since 2011.
Image by Sgt Rupert Frere RLC | © UK MOD / Crown Copyright 2011
Used under Open Government Licence 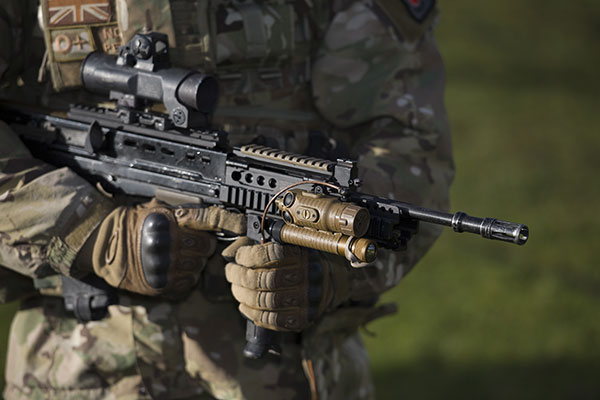 A modern L85A2 fitted with a Grip Pod, ELCAN Lightweight Day Sight (LDS) and Laser Light Module (LLM Mk3). The Grip Pod is a foregrip that can transform into a mini bipod. The LDS is based on the ELCAN Specter OS 4X and has been brought in to replace the SUSAT. The 4x main scope is augmented by a mini red dot Shield Close Quarters Battlesight (CQB) mounted on its top. The LLM3 projects a white light torch beam, infrared (IR) laser aiming / marking beam and IR flood illumination.
Image by Andrew Linnett | © UK MOD / Crown Copyright 2014
Used under Open Government Licence 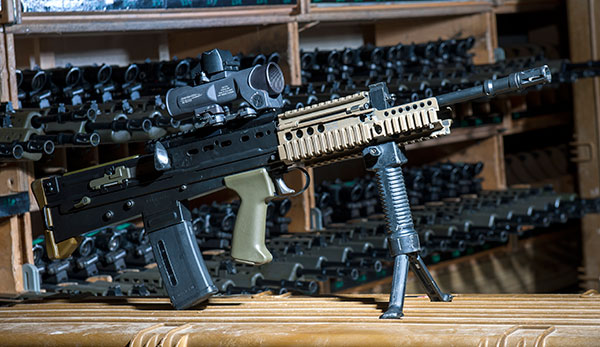 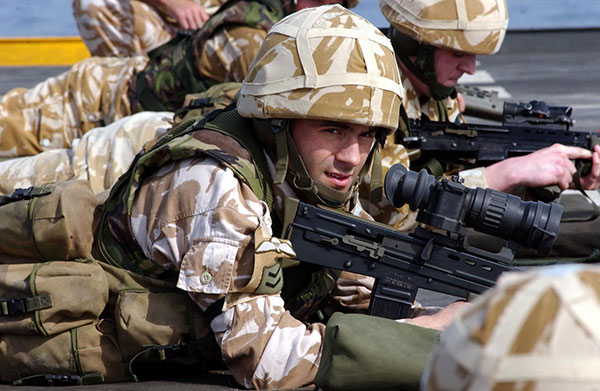 In April 2018, it was announced that a Mid Life Improvement (MLI) project would upgrade the MoD's L85A2 fleet to a new A3 design. Features of the new rifle include a full-length Picatinny rail atop the upper receiver that can accomodate clip-on nightvision scopes. A new forearm has a Picatinny rail at the 6 o'clock position and Keymod rails at 3 and 9. The forearm is free-floating, which should increase accuracy. The upper receiver has a new gas block. A stud has been fitted to prevent the change lever from over-travelling. The modifications result in the A3 being 100 grams lighter than the A2. 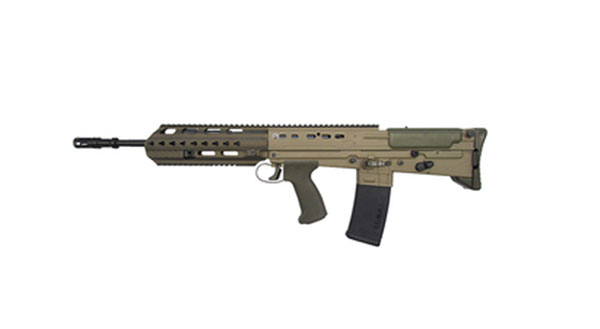 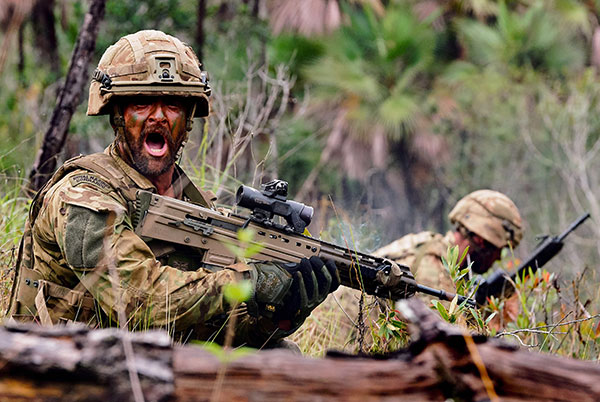 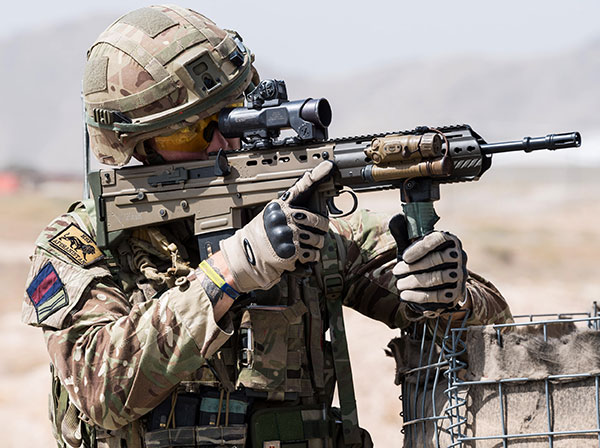 A member of the Household Cavalry on operations in Afghanistan (Op TORAL) armed with a SA80A3 fitted with a Lightweight Day Sight, LLM and gripod.
Image by CPL REBECCA BROWN | © UK MOD / Crown Copyright 2020
Used under Open Government Licence 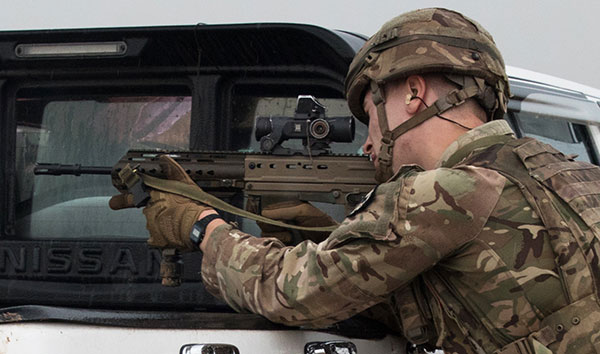 Video on the L85A3 from the Grenadier Guards, the first British Army unit to fire the new weapon
from the British Army Youtube Channel

One man in a typical 4-man infantry fire team carries a SA80 fitted with an underslung L123A3 40mm grenade launcher. It is a single-shot wepon that uses a side opening breech loading action. It can be employed in either direct-fire or indirect fire modes. The UGL can fire LV Frag Gren 97 fragmentation rounds, HEDP M9115A1 high explosive rounds and L8A1 practice rounds.

The UGL is aimed either via leaf sights, EOTech reflex sight, or a Rapid Acquisition Aiming Module. 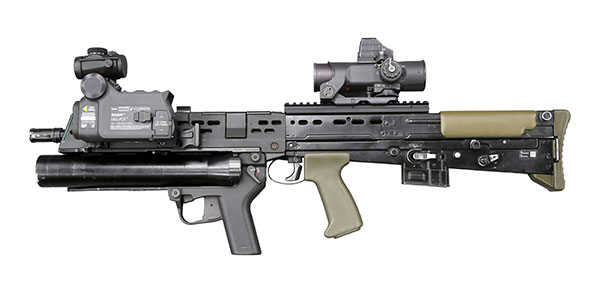 L85A2 fitted with 40mm L123A2 Underslung Grenade Launcher (UGL). The current model in service is the L123A3. Note the Wilcox Rapid Acquisition Aiming Module (RAAM UGL-FCS) also fitted. This device features a set of visible and infrared laser pointers, ballistic computer and a sight on a motorized gimble. The operator lases the target, the ballistic computer calculates the required trajectory and a the gimble automatically articulates the sight so the operator can get the correct elevation before firing.
Image by Steve Dock | © UK MOD / Crown Copyright 2016
Used under Open Government Licence 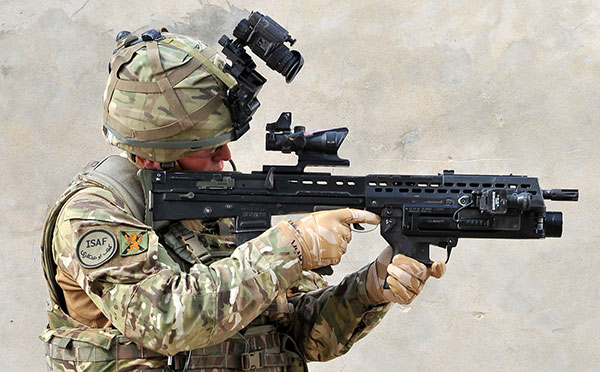 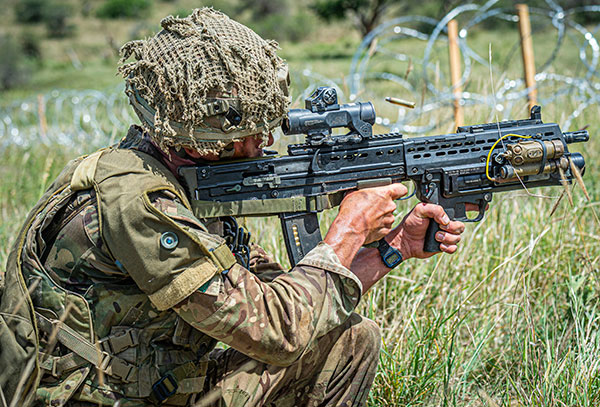 The L86A1 Light Support Weapon (LSW) was developed alongside the L85A1. It is essentially the same gun but with a longer, heavier barrel, bipod, shorter handguard and a vertical handgrip at the rear. It was designed as a squad-level fire support weapon, with two per infantry section, able to deliver suppressive fire at a longer range and in higher volume than the L85. The longer barrel and bipod also enabled the LSW to be used as a quasi-sharpshooter rifle.

As with the L85A1, the LSW received a number of upgrades to bring it up to L86A2 standard. Despite these improvements, the LSW has never been that popular with the troops. In the fire support role, it has been superceded by the L1101 minimi. The introduction into service of the L129A1 Sharpshooter rifle has pushed the LSW out of the sharphooter niche also. Indeed, it was reported in August 2018 that the MoD plans to phase the LSW out of British military service. 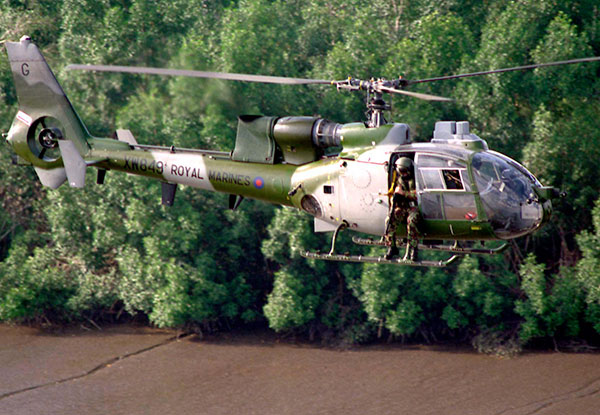 The L22A2 carbine is a shortened version of the L85A2 rifle. It was developed for use by vehicle drivers, helicopter aircrew, and crews of armoured vehicles, who needed an easily-stowable personal defence weapon in a more compact form than the fullsize L85A2. It was used by 43 Commando Fleet Protection Group boarding teams as its short length made it suitable for weilding in the tight interior spaces found on ships. 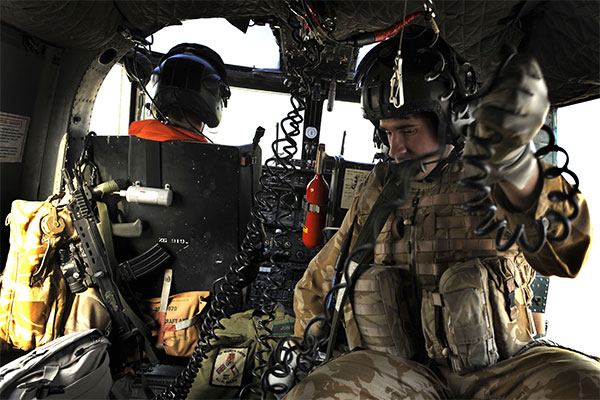 The L22A2's features a 12.5 inch barrel length. The shorter barrel means the carbine is less accurate and packs a lighter punch, especially at long range, when compared to its fullsize cousin. A vertical grip has been fitted to allow for stable two-handed operation. Small lengths of mounting rails allow for the fitting of lights and laser devices. 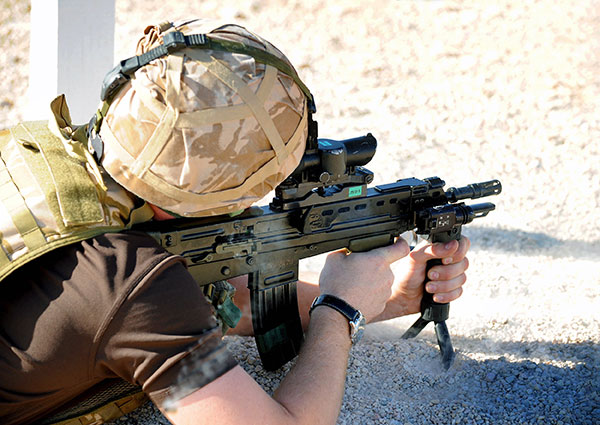