This site uses cookies. By continuing to use this site you consent to our use of cookies. more info | ok
british special forces » news » sas quad bike teams target is
▼ share this page

British Special Forces have been carrying out raids against Islamic State (IS) forces inside Iraq, it has emerged. Teams from the 22nd Special Air Service (SAS) have been launching ambushes against IS using quad bikes. [1]

The Daily Mail reports that the SAS have targeted IS supply lines and vehicle checkpoints in a series of daring raids. According to the paper, these are intelligence-led operations, with extensive use of drones and signals intercepts used to plan the attacks. Once SAS planners have selected a target, the SAS strike team, along with their quad bikes, is loaded onto a RAF Chinook - presumably 7 Squadron Special Forces Flight. The Chinook then flies to a pre-arranged insertion point - typically many miles from the target due to the noise made by the helicopter. The SAS team, armed with GPMGs and sniper rifles, then move off under the cover of darkness to carry out their mission.

The Mail quotes an SAS source as saying:

"Our tactics are putting the fear of God into IS as they don't know where we're going to strike next and there's frankly nothing they can do to stop us. We're degrading their morale. They can run and hide if they see planes in the sky but they can't see or hear us. Using so many snipers takes the fear factor to another level too; the terrorists don't know what's happening. They just see their colleagues lying dead in the sand."

If true, this latest news heralds a further escalation of the role of British Special Forces in Iraq and Syria. Initial reports painted the picture of a reconnaissance-based campaign[2], with an emphasis on intelligence gathering and passive assistance to Iraqi and Kurdish forces. Further reports indicated that special forces had adopted a more up-front role, acting as forward air controllers in strategic battles, such as the siege of Kobane[3,4]. There was also a report of an SAS sniper team in action in Iraq.[5] 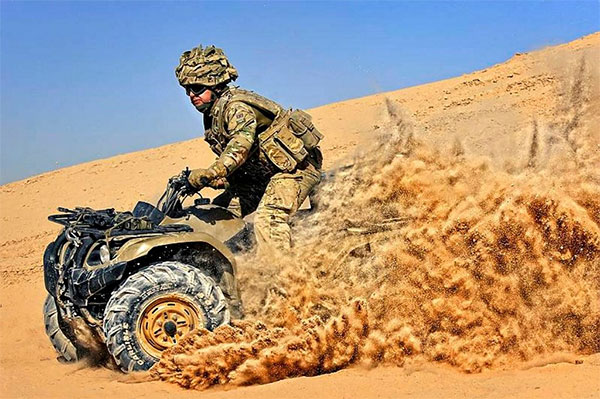 According to reports, the SAS are using quad bikes - also known as all-terrain vehicles (ATV) - to carry out guerilla-style hit-and-run raids against IS targets in the Iraqi desert. UKSF often employ quad bikes as scouts for mobility patrols. Models in British Army use include the Yamaha Grizzly 450 (pictured here).
Image by Capt Dave Scammell © UK MOD / Crown Copyright 2012 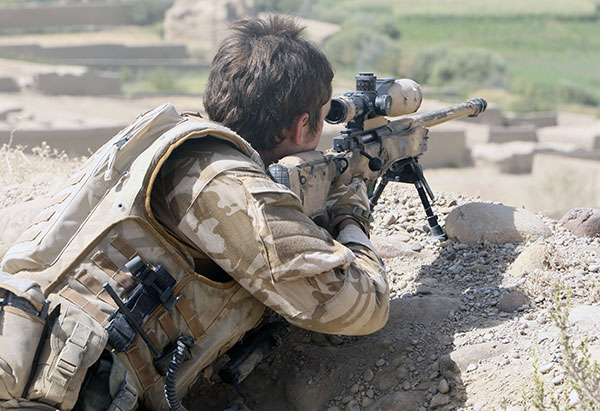