This site uses cookies. By continuing to use this site you consent to our use of cookies. more info | ok
british special forces » news » chf get new door gun
▼ share this page

The Sea King helicopters of the Commando Helicopter Force (CHF) have been fitted with new and improved door guns, it has been revealed.

Sea King HC4 helicopters will now be capable of toting the M3M .50 calibre machine gun. Previously, the aircraft could only use the 7.62mm GPMG. The M3M is a variant of the HMG which has been adapted for use on helicopters and offers a significant upgrade in firepower.

846 Naval Air Squadron (846 NAS) Sea King HC4s will be supporting 16 Air Assault Brigade when it deploys to Afghanistan in October. 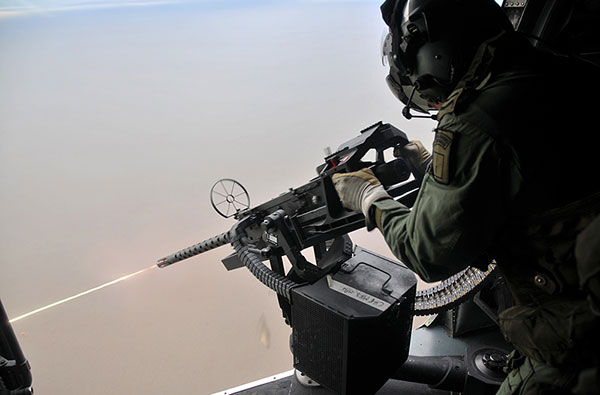 A Royal Marines CHF Sea King HC4 door gunner fires the M3M. The M3M is mounted on a special base-plate which allows the weapon to be stowed when not in use and the cabin door closed.
Picture: Crown Copyright/MOD 2010