This site uses cookies. By continuing to use this site you consent to our use of cookies. more info | ok
british special forces » gear » misc kit » thermal imagers
▼ share this page

Thermal imagers (TI) use passive infrared sensors to detect IR radiation given off by warm objects which is then translated into a visible picture for the device's operator. Particularly effective at night when ambient heat is less, a good thermal imager can show up the heat given off from people, vehicles and enemy positions. Thermal imagers are a superb tool for battlefield reconnaissance.

The FIST Thermal Sight (FTS) is an uncooled thermal imaging scope designed to be mounted on rifles and light machine guns. It was brought into service as part of the Surveillance and Target Acquisition (STA) element of the MoD's Future Integrated Soldier Technology (FIST) program.

Qioptiq Ltd, make the FTS, who also call it the Dragon SR. According to the product brochure, the Dragon SR can detect a man out to distance greater than 2km. The FIST comes with closequarter battlesight (CQB) red dot scope mounted atop the scope. 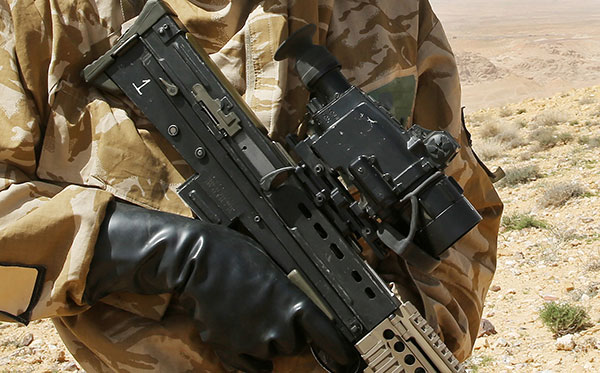 A Dragon SR / FTS mounted on a L85A2 rifle wielded by a British Army Soldier. Note the CQB red dot sight mounted atop the main scope. A laser pointer has also been attached to the scope's right side.
image by Graeme Main  | © UK MOD / Crown Copyright 2016
Used under Open Government Licence

The FTS is carried by reconnaissance units such as the Special Reconnaissance Regiment and Brigade Reconnaissance Forces. The device can be mounted on the top rail of a L119A1/A2 carbine, L85A2/A3, LMG or employed as a hand-held scanner.

The Sniper Thermal Imaging Capability (STIC) is an in-line, or 'clip on', thermal imaging sight that is mounted forward of a sniper rifle's main dayscope. The STIC is the result of a 2009 urgent operational requirement (UOR) to enable British snipers in Afghanistan to engage targets in extreme low light conditions, where their image intensifier night sights were ineffective. The STIC can be mounted on the L115A3 sniper rifle and the L121A1 Anti-Material Rifle. 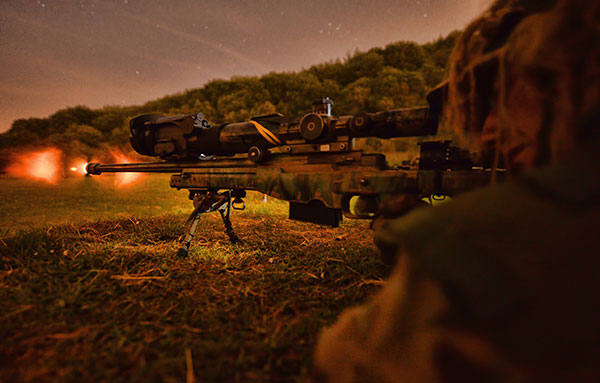 Qioptiq Ltd makes the STIC, who sell it as the SVIPIR-2+ Thermal Weapon Sight. The sight can detect human targets up to 1.5km out. It features a video-out facility and can be used as a hand-held surveillance device.

Thermal imagers can be dedicated units or part of target acquisition systems on weapons such as anti-tank missile launchers. Types in use in the UK military include : 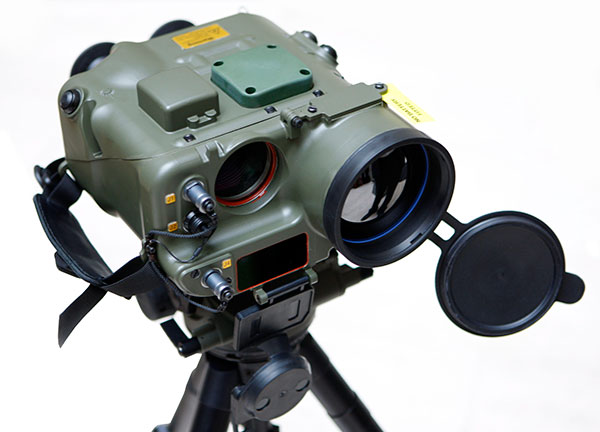 Use of Thermal Imagers by UK Special Forces and Elite Troops

UK Special Forces first reported use of a thermal imager in a conflict was during the Falklands campaign in 1982. On the night before the main British landings, the Special Boat Service (SBS) used a spyglass thermal imager to locate an Argentine force atop Fanning Head. When combined teams of SBS and 148 Bty Naval Gunfire Specialists inserted by boat onto West Falklands, they used a TI to scan the shoreline for Argentine troops.

Working deep behind Iraqi lines during Desert Storm, SAS Landrover columns used the MIRA sights from their MILAN launchers to scout the desert for enemy forces.

In more recent actions, 45 Commando, Royal Marines are known to have used tripod-mounted TIs during Operation Ptarmigan, their hunt for Taliban and Al-Qaeda fighters in high mountain valleys of Afghanistan.

When 3 PARA deployed to Helmand Province, Afghanistan, in 2006, they found that the TI sights of the new Javelin missile to be an a invaluable aid for spotting Taliban forces hiding out in the darkness.

Thermal imagers also have a role in counter terrorism operations. In some circumstances, TIs can be used to locate people through the walls of a building, helping the SAS to build up a picture of what's happening inside.