This site uses cookies. By continuing to use this site you consent to our use of cookies. more info | ok
british special forces » special air service » history » desert storm
▼ share this page

When war loomed in the Gulf in late 1990/early 1991, Britain committed a large number of forces, including the 22nd Special Air Service. Initially brought into the Gulf without a clear role, the SAS feared that the much-touted high-tech air war might mean a quite war for them. Their traditional role of reconnaissance had largely been assigned to U.S. Special Forces. The human shield crisis seemed like a promising way into the conflict at first but it soon became clear that any attempt to rescue the hundreds of Western civilians held by Saddam Hussein would most likely end in failure and not go ahead. Besides, it wasn't long before the crisis was ended with the release of all the hostages.

It was through the efforts of Sir Peter de la Billiere, commander of UK Forces and an Ex-SAS officer, that the SAS were finally given something to get their teeth into. de la Billiere had been lobbying for the use of Special Forces behind Iraq lines. Mindful of the Regiment's beginnings in the Deserts of Africa during World War 2, he persuaded his U.S. counterpart, Norman Schwarzkopf of the need for small fighting columns of SAS forces operating deep behind Iraqi lines, hitting targets of opportunity and generally making a nuisance of themselves. 'Stormin Norman' was distrustful of special operations forces, questioning what the SAS could do that an F16 couldn't and was equally as concerned about diverting resources to rescue an special ops that went wrong.

With the air campaign now underway, the SAS were ordered to prepare to move across the border from Saudi Arabia into Southern Iraq, where they were to have carte blanche to attack and harass Iraqi forces at will. For the SAS it was a dream assignment, although soon the focus of their missions would significantly narrow. 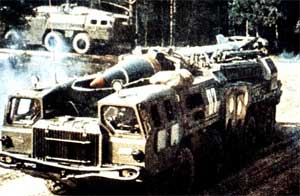 In retaliation for the pounding that his forces were taking, Saddam Hussein responded with his only long range weapon left in his arsenal - the Scud missile. The Soviet-designed missile was inaccurate and posed only a small threat to coalition forces. It was when Saddam started firing Scuds into Israel that the allied commanders started to worry. The fragile coalition of Arab countries allied with the US would surely break apart if Israel was provoked into the war and soon Schwarzkopf was getting anxious phone calls from his political masters.

In an effort to find the Scuds, the US air force flew hundreds of sorties into the Western Iraqi desert. Despite their much vaunted technology, the air force could not find a single Scud launcher. This is not surprising as the Iraqis were hiding the Scuds under bridges and in barns and they were transporting them inside school buses.

It became clear that only eyes on the ground could possibly find the elusive Scuds. So, with Israel's patience quickly running out, it was decided to send the SAS in after the Scud Launchers. A and D squadron drove into the Iraqi desert on a search and destroy missions. Moving in fighting columns of 8 heavily armed 110 land rovers along with unimog support trucks, the SAS pushed north, traveling by night and laying up under camouflage nets by day.

Employing motorcycle outriders to scout ahead for the enemy, the SAS patrols were looking for trouble and soon found it. One column were compromised when they layed up near an Iraqi artillery division and their camouflaged position was approached by an Iraqi jeep. The SAS opened fire on the vehicle, killing all but one of the passengers who they took with them as they hurried away from the area. Other patrols had similar small contacts, often coming up against the edges of entire Iraqi divisions.

Whenever the SAS found Iraqi communications installations that could be associated with the Scuds, they would mark them out for air strikes and on at least one occasion they called in US bombers to attack a Scud launcher. (watch video). When the situation demanded, the SAS would also do direct assaults on comm sights. Towards the end of the bombing campaign, the 2 A squadron fighting columns joined up for a combined attack on a massive Iraqi comms center code named, Victor Two.

The SAS land rover columns would also put in ambushes along the Iraqi supply lines. Shrouded in the night, the wagons would line up in desert overlooking a road frequented by the Iraqis. When a sufficiently juicy target would drive into view, the full fury of the SAS's weapons would be unleashed. The SAS Land Rover 110s in the fighting columns were armed with .50 machine guns, Milan anti-tank missile launchers, MK19 40mm grenade launchers and GPMGs.

SAS fightings columns also carried out battlefield damamge assessment, surverying the aftermath of coalition air strikes. During one such mission at an Iraqi air field, A Squadron's commander was captured when his land rover was shot up.

A contingent from B Squadron were also in the Gulf theatre. With A & D Squadrons fully deployed behind Iraqi lines, several B Squadron Troops were held in reserve. When the political crisis over the SCUDs loomed large, they were put into action. Small 8-man teams were to be flown into Iraq where they would put in covert OPs along the main supply routes (MSR) in the hopes of catching a SCUD convoy on the move. Once found, the SAS OPs would call in coalition air power to take out the missile launchers. They were also to scout for fibre optic cables that carried command signals from Baghdad to the Deployed SCUD launchers. These were believed to be strung alongside the MSRs and if found, the SAS were tasked with cutting them.

One of the B squadron SCUD watch teams was assigned the now infamous call sign, Bravo Two Zero. Led by a sergeant who now writes under the nom deplume, Andy McNab. Bravo Two Zero was flown into the Iraqi desert by a RAF Squadron 7 Chinook, where it would operate on foot. Much has been written about their mission. McNabb's first hand account of the operation was a huge bestseller and spawned a flurry of memoirs by ex-UKSF operators, including 'The One That Got Away', by fellow patrol member, Chris Ryan.

A summary of events of the Bravo Two Zero patrol is as follows:

Other B Squadron patrols were inserted along the MSRs. One patrol immediately scratched the mission upon landing and finding that there was nowhere to conceal themselves; a move which was criticized by some but in the light of Bravo Two Zero's problems was probably a wise one.

Throughout the SAS campaign, the Land Rover columns were resupplied by Chinooks from RAF Squadron 7. Towards the end of the air war, with both A and D Squadrons runing low on vital stores, an audacious plan was hatched to resupply them. The SAS formed a resupply convoy, christened as 'E Squadron', of 10 4-ton Army trucks, escorted by heavily-armed Series 90 Land Rovers ('Dinkies'), which drove North out of Saudi and some 100+ miles into the Iraq Desert to a largel wadi system where A and D Squadron had mustered.

Far from the quiet war they had feared, the Special Air Service had had a busy time of it. If nothing else, they had proved to the war planners that their can be no substitute for the mark 1 eyeball or for brave, highly skilled men on the ground.