This site uses cookies. By continuing to use this site you consent to our use of cookies. more info | ok
british special forces » royal marines » 3 Commando Brigade
▼ share this page

3 Commando Brigade is the UK's commando force. It provides an amphibious contigency capability and can deploy over 5000 personnel. It is manned by men from the Royal Marines, Royal Navy and British Army. 3 Commando Brigade consists of the following elements:

3 Commando Brigade includes elements from the British Army. Most of these men go through extensive Commando training which enables them to operate alongside the Royal Marines.

With the addition of the attached Army units, 3 Commando Brigade can operate as a self-contained expeditionary force.

The ATG is held at high readiness to respond to a crisis anywhere in the world. It frequently forward deploys to regions such as the Mediterannean or Persian Gulf for extended periods as a demonstration of capability and commitment.

40 and 45 Commando cycle through the Lead Commando Group and Force Generation (training) roles on a 6 monthly basis.

The LF is usually embarked on a Landing Platform Dock such as HMS Albion or HMS Bulwark. For cost saving reasons, either Albion or Bulwark is held in reserve, while the other is operational as the Fleet Amphibious Flagship. 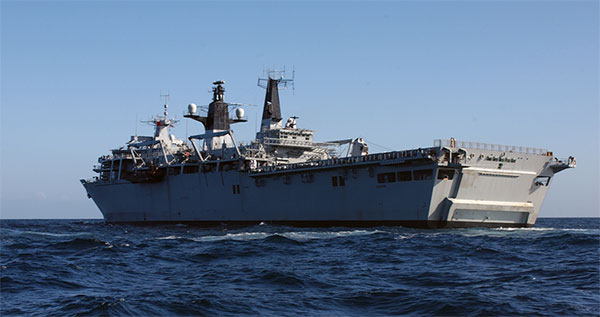 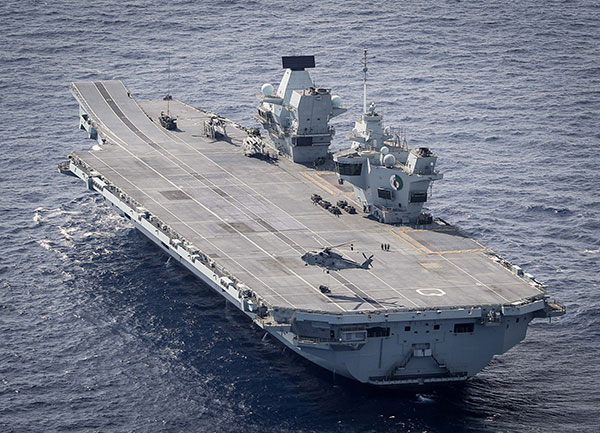 As it enters service and devlops full operating capability, the Navy's new The Queen Elizabeth aircraft carrier may play an important role in the ATG. Its air wing of F-35B Lighning II jets will be on hand to provide air cover and close air support during, an amphibious assault. The carrier has an organic force of Royal Marines from Lima Company 42 Commando on board, obstensibly for Joint Personnel Recovery (JPR), but could host a larger force. Its rotary air wing includes Merlin MK2 helicopters, some fitted with Crowsnest radars, and Merlin Mk4 and Wildchat AH1 from from the Commando Helicopter Force (CHF). Apache Gunships and Chinooks could be added to bolster the carrier's air wing.
Image by LPhot Kyle Heller © UK MOD / Crown Copyright 2018 | used under open government licence

The Amphibious Task Group is the UK component of the UK-led Joint Expeditionary Force (Maritime) (JEF(M)), a multinational Naval formation.