Due to non-disclosure contracts signed by all UKSF personnel, detailed accounts of UKSF operations during Gulf War 2 are thin on the ground. This page attempts to piece together what little has been reported on UK Special Forces operators in the weeks leading up to the fall of Saddam.

On 21st March, 2003 a combined force of a squadron of British SAS and a squadron of Australian Special Air Service (SASR) sized key airfields in Western Iraq, close to the Jordanian border. The strategically important H2 and H3 airfields were taken by the British/Australian SAS who assaulted the sites in formations of heavily armed Land Rovers - the UK SAS driving DPV (Desert Patrol Vehicles), the Aussies driving their similar 6-wheeled vehicles. After neutralizing the guard towers and other defensive positions, the SAS/SASR teams cleared the hangars and admin buildings of the sites. It's been reported that troops from 45 Commando, Royal Marines then set up a security screen around the airfields, which were rapidly set up as forward operating bases (FOBs) for the SAS.

With the 2 FOBs established, the SAS then headed eastwards, out into the Iraqi desert. In a reprisal of their role in Desert Storm, the SAS were on the prowl for Iraqi SCUD missile launchers - which Saddam might again use to attack Israel - as well as any other military assets they could find. The SAS Land Rover columns were reportedly backed by British air power in the form of RAF GR7 Harriers operating from a Jordanian airbase. Unmanned Predator spy planes were flown ahead of the SAS advance in order to scout out targets. 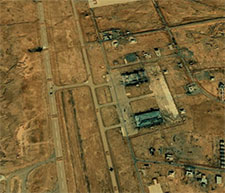 Satellite view of the H2 Airfield siezed by the British and Australian SAS.

A few nights after the initial SAS operation, the US Army's 75th Ranger Regiment airdropped in and took the H1 airfield which was then used as a launching pad for more allied Special Operations. One military source at the time described Iraq's western desert as a 'special forces playground'.

In the first weeks of the war there were reports of heavy fighting involving the SAS and US Special Forces (Green Berets) versus Iraqi Special Republican Guard and Special Security Services around a nuclear devlopment site near Qaim on the Syrian border. This and other similar reports suggest that the one of the SAS's key targets were suspected Weapons Of Mass Destruction (WMD) production and storage sites.

The Special Boat Service played a more active role in Gulf War II than in its prequel. In the 1991 war, the SBS carried out vital demolitions operations - one notable mission had them fly by Chinook deep behind Iraqi lines to blow up a fibre-optic cable. They also secured the British Embassy in Kuwait at the end of the campaign. Important work, but in none of the known operations did the SBS engage in actual combat.

This time it would be different. The outside world first got an inkling that an incident involving UK Special Forces had occurred when the Iraqi authorities displayed captured British equipment on TV. The armed Land Rover, a quad bike, non-standard radio equipment and personal weapons shown all suggested that a UKSF operation had been compromised.

The precise truth of what happened is still unclear. What has been widely reported is that a full SBS Squadron, some 60 men, operating - unusually for the SBS - together as one unit, had been deployed into Northern Iraq. The SBS Land Rover columns were reportedly tasked with seeking out WMD sites. Their mission required them to liaise with local Nomad tribesmen. It is thought that the SBS were betrayed by the Nomads, who alerted Saddam's militia, the Fedayeen, who then attacked the SBS's laying up position.

The Fedayeen attacked in strength, numbering some 250. They were firing 12.7mm DSHK heavy machine guns mounted on the back of 4x4s and firing mortars. The SBS executed a fighting withdrawal, trading volleys of fire with the Iraqi militia in one of the fiercest Special Operations battles of the war. Several Land Rovers were either shot up or got bogged down in mud as the SBS regrouped and maneuvered. After a protracted battle, the SBS squadron decided to split up into smaller groups and withdraw to Syria.

Controversy and rumour surrounds the operation. Press reports surfaced quoting SAS sources decrying the SBS's performance under fire, even going so far as accusations of cowardice. A rebuttal, supposedly from SBS insiders refuted the SAS version of events. Some reports stated that the SBS Squadron was being commanded by an SAS Officer who was subsequently kicked out of the SAS. When a US fighter jet was shot down by a shoulder-launched surface-to-air missile (SAM), there was speculation that it was in fact a US-made Stinger captured from an abandoned SBS Land Rover.

It's also believed that the SBS were active in the south where they reportedly assisted US Navy Seals in securing the beaches of the Al Faw Peninsula for a joint US/UK amphibious landing. Following the British advance from Al Faw, the SBS were also reported to be active in and around the southern Iraqi city of Basra. A squadron reportedly infiltrated the city and called in air strikes against Saddam's supporters, as part of British efforts to demoralise the regime in the city.