This site uses cookies. By continuing to use this site you consent to our use of cookies. more info | ok
british special forces » special air service » sas weapons » stinger sam
▼ share this page

The American-built FIM-92 Stinger is a shoulder-launched anti-aircraft missile, first used by the SAS during the Falklands conflict. As hostilities loomed, the SAS brought a number of Stingers over from the American Delta Force base at Fort Bragg. The troopers had no time to train on the Stingers but were still able to down several Argentine aircraft, including deadly Pucara attack aircraft. Despite a few misfires due to lack of training, the Stingers used by the SAS proved to be much more effective than the British-made Blowpipe SAMs wielded by the regular forces deployed to the Falklands.

The Stinger is a heat-seeking, fire and forget system that is deadly against low-flying aircraft. As part of the West's efforts to hamper the Soviet occupation of Afghanistan during the 80s, MI6 and the CIA provided Stingers to Afghani Mujahadeen resistance fighters. SAS men infiltrated into Afghanistan along with the Stingers, linking up with Mujahadeen forces and training them in the use of the SAMs. Once the Stinger was introduced into the conflict, the tide began to turn against the Soviet forces. Close to 200 Soviet helicopters, attack jets and transport planes were downed with Stingers.

The Regiment took Stingers to war during 1991's Desert Storm. SAS Land Rover columns were operating deep behind Iraqi lines and far away from Allied air cover. Vulnerable to attack from the Iraqi air force, the fighting columns took Stingers with them, although there are no reports of any of them being fired in anger. 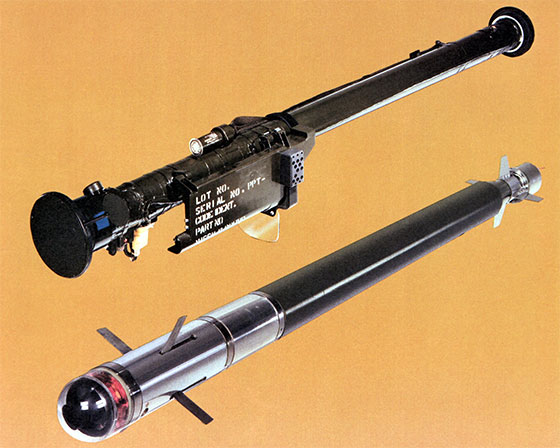 Stinger missile pictured next to its launcher.
photo courtesy US Army