This site uses cookies. By continuing to use this site you consent to our use of cookies. more info | ok
british special forces » parachute regiment » 4 para
▼ share this page

The 4th Battalion, the Parachute Regiment (4 PARA) is a Territorial unit staffed by civilians. 4 PARA act as reserves for 2 and 3 PARA, augmenting them at Company level (exercises) and on an individual level (operations).

4 PARA consists of around 336 ranks and is made up of Companies (Coys) based around the United Kingdom. Each Company consists of 2 rifle platoons and a specialist platoon.

Battalion Headquarters (HQ Coy) is based at Pudsey. 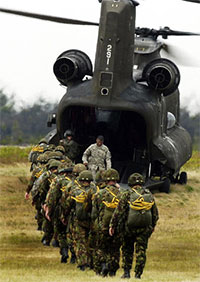 4 PARA soldiers preparing to board a US Chinook during training in June 07 for deployment in Afghanistan in 08.

112 men from 4 PARA augmented 1 and 3 PARA during Operation Telic, Iraq 2003. Reserves from 4 PARA have joined their regular counterparts in previous operations in Sierra Leone, Bosnia, Kosovo and Northern Ireland.

4 PARA selection is open to UK residents aged 18-32 and is dependant on passing a medical exam. Since they must be able to operate alongside their regular counterparts, the men of 4 PARA are fully trained paratroopers and pass through the following training program