This site uses cookies. By continuing to use this site you consent to our use of cookies. more info | ok
british special forces » uksf aviation
▼ share this page

Air support for UKSF operations is provided by some highly trained pilots from all branches of the UK military. 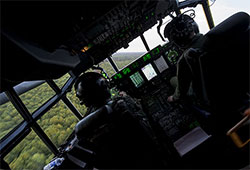 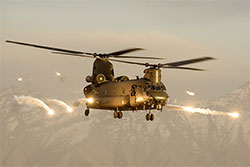 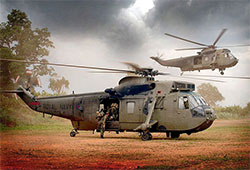 RAF Special Forces are the cream of the RAF, tasked with flying UKSF forces to and from battle. Trained to penetrate deep behind enemy lines, RAF Special Forces flights operate both fixed-wing and rotary-wing aircraft.

UKSF, as well as the Paras and Royal Marines may also be supported by any of the many squadrons in the RAF, AAC or Fleet Air Arm. For instance, it is believed that 4 RAF Puma HC1s, operated by No 33 & No 230 Squadrons RAF, supported SAS Task Force Black in Iraq.

It is also believed that UK Special Forces in Afghanistan were sometimes supported by British-operated MI-8/MI-17 helicopters. These Russian-built helicopters were fitted with western radio gear and countermeasure systems, additional armour and GPMGs mounted in the cabin doors. UKSF used the MI-17s for several reasons: there was a shortage of helicopters capable of operating across the mountains of Afghanistan, the ubiquitous MI-17 airframe was less obviously Western in appearance than say, a Chinook, and spare parts were easy to find in the region.

As well as operating the C-130J Hercules, the RAF is also developing the tactical role for its C-17a globemaster III and A400M Atlas airlifters.