This site uses cookies. By continuing to use this site you consent to our use of cookies. more info | ok
british special forces » the gurkhas
▼ share this page

Respected by Britain's allies and feared by its enemies, the Gurkhas reputation precedes them wherever they deploy. Whilst technically a standard infantry unit, the Gurkha Rifles' legendary toughness, skill and tenacity earns them, in this web site's opinion, the status of an elite fighting force.

The Gurkhas are a product of Britain's colonial past. These Nepalese tribesman had distinguished themselves when fighting against British-backed forces in the early 19th century. The British were so impressed with the Gurkhas' fighting prowess and spirit that they began hiring them as mercenaries. Soon, dedicated Gurkha regiments were formed within the British Indian Army.

The Brigade Of Ghurkas

The current order of battle (ORBAT) of Gurkhas within the modern British Army is as follows:

The Gurkhas fought for the British during World War 2 in the Pacific, North African and European theatres. 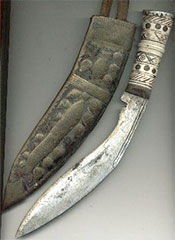 The Gurkha's dreaded Khukri knife, as carried by every Gurkha soldier. It's rumoured that once drawn, the Khukri must draw blood before being re-sheathed.

Following Indian independence in 1948, several Gurkha regiments joined the Indian Army whilst others were incorporated into the British Army and were stationed in Malaya. Gurkha formations fought rebels during the Malayan emergency. Later, they were deployed to Brunei to help quash a revolt. A commando unit, the Gurkha Independent Parachute Company, was temporarily raised for deployment to Borneo during the Indonesia-Malaysia confrontation of the early sixties. The Gurkha commandos worked closely with the Special Air Service during the conflict.

The Gurkhas were deployed to the Falklands during the 1982 conflict. Despite having to deal with a completely foreign climate, landscape and the Antarctic weather, the Gurkhas were well up for a fight; only to be disappointed when the Argentine units they were to face surrendered when they learned it was the Gurkhas coming for them.

The Gurkhas also deployed alongside NATO forces during operations in Kosovo in 1999, working alongside the Parachute Regiment, where they helped secure the main routes into the country.

A contingent of Gurkhas, along with a small team of Special Boat Service (SBS) operators, flew into East Timor in September 1999 as part of a UN peace keeping force. The Gurkhas engaged in brief skirmishes with Indonesian forces around the main airport. 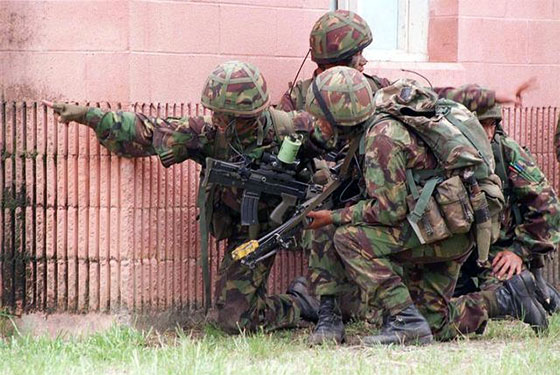 Gurkhas carrying out training in house-to-house combat whist on exercise in the US. Note the Khukri attached to the foremost Gurkha's webbing.
DoD photo by: LANCE CPL. C.D. CLARK
advertisements
CONNECT
NEW PHOTOS