This site uses cookies. By continuing to use this site you consent to our use of cookies. more info | ok
british special forces » special boat service » operations » afghanistan
▼ share this page
note: www.specialboatservice.co.uk content has been moved to this section

The SBS has been very active in Afghanistan in 2007. With the Special Air Service assigned to Task Force Black in Iraq, the SBS has been focused on special operations in Afghanistan, mostly in the South. In May of 2007, C Squadron, assisted by the US's secretive 'Task Force Orange', struck a blow against the Taliban Leadership.

Mullah Dadullah was an Afghani who fought with the Mujahideen against the Soviet occupation in the 80s. It was during that war that he lost his leg. A close aide to Mullah Omar, Dadullah eventually rose to the rank of Senior Military commander of the Taliban.

Mullah Dadullah was a high value target and a sophisticated operation was put into place to find and neutralize him.

In March 2007, a controversial prisoner exchange took place. An Italian reporter, Daniele Mastrogiacomo, along with his 2 Afghani assistants, had been taken hostage by the Taliban. In a widely critisized move, the Kabul authorities agreed to Dadullah's demands that they release 2 senior Taliban commanders held in custody in exchange for the safe return of the reporter and aides.

What seemed to the world like giving in to terrorist demands has now been revealed as a classic military deception. It transpires that a top-secret US electronic surveillance unit, known as 'Task Force Orange' (TF-Orange), were able to track the released Taliban commanders. It is speculated that the Taliban had somehow been tagged with trackers, perhaps in their bodies. It's also reported that satellite phone conversations between the released Taliban and Dadullah were monitored and tracked. However it was done, their movements were successfully tracked by TF-Orange, who suspected they would eventually reveal Mullah Dadullah's location. By May, TF-Orange had pinpointed Dadullah's location: Bahram Chah, in the South of Helmand Provence, close to the border with Pakistan. 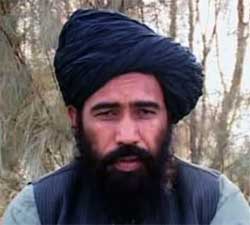 Mullah Dadullah in still taken from a Taliban-released video.

Dadullah was tracked to a compound at Bahram Chah, close to the Pakistani border.

Some 50 SBS commandos from C Squadron were given the mission to raid Dadullah's stronghold.

A recon element approached the area in a Supacat 6x6 all terrain vehicle. The SBS recon team determined that an air strike on Dadullah's mud-walled compound would not guarantee that he would be taken out. It was then decided that C Squadron would have to go in and finish the job on foot.

The rest of C Squadron, along with a group of Afghani soldiers, loaded into 2 RAF Chinooks and inserted into the area, coming under fire from the Taliban defenders. Once landed, the SBS put in a classic infantry attack on the compound, 'pepper-potting' towards the objective - one group going firm and providing covering fire as another group presses forwards before going firm themselves. The Taliban defenders numbered only 20 but were fanatical and put up a spirited defense with rifles, machine guns and RPGs. After a four hour battle, the SBS were able to clear the compound, suffering only 4 wounded.

Dadullah had been killed in the attack, shot twice in the torso and once in the head, a typical 'double-tap', favoured by Special Forces Operators. It's not clear if he was taken out by the SBS or the US-Trained Afghanis present. The Taliban quickly filled his now vacant spot with a new man.