This site uses cookies. By continuing to use this site you consent to our use of cookies. more info | ok
british special forces » uksf aviation » 771 nas
▼ share this page

The squadron was based at RNAS Culdrose in Cornwall, from where it flew up to 8 Sea King Mk5 helicopters on SAR missions, covering Cornwall, The Scilly Isles, the Western English Channel and the Western Approaches, an area which reaches out some 200 nautical miles. 771 NAS' motto was 'non nobis solum - not unto us alone'.

711 NAS also had a Maritime Counter Terrorism (MCT) role. The squadron's MCT Flight was trained to rapidly deploy UKSF MCT teams onto maritime objectives, both static and moving, via fast-rope. The squadron had developed the use of Night Vision Goggles (NVG) for both SAR and MCT operations, the latter including close formation flying on NVGs.

771 NAS completed their last Search and Rescue shift on the 31st of December, 2015. Its SAR duties were handed off to private contractors. The squadron was subsequently disbanded and its helicopters sold off. 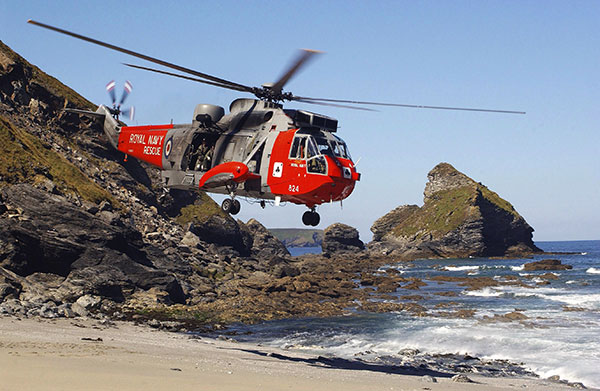 A Sea King Mk5 conducts a search and rescue operation over the coast of Cornwall. The squadron fielded the Sea King HAR.5 helicopter, the SAR variant of the Mk5. The HAR.5 variants flown by 771 NAS had been converted from anti-submarine HAS.5 aircraft, with the ASW kit removed. The HAR.5 retained the MEL Super Searcher radar which was housed in a radome to the rear of the main rotor assembly. The helicopter also featured a winch that could be used in rescue operations.
image by RNAS CULDROSE PHOT SECTION  | © UK MOD / Crown Copyright 2004
Used under Open Government Licence