This site uses cookies. By continuing to use this site you consent to our use of cookies. more info | ok
british special forces » special air service » air troop
▼ share this page

Air Troop , also known as 'Freefall Troop', are the Regiment's freefall parachuting specialists, tasked with jumping behind enemy lines, either on their own missions or to pave the way for other squadron troops. The very first SAS mission of World War 2 had the regiment parachuting into the African desert to destroy German installations.

HALO - High Altitude Low Opening - In which the SAS men jump from high altitude (30,000 ft or higher), beyond visual range of anyone on the ground. The jumpers freefall most of the way down. Chutes are only deployed at the last minute to prevent them being spotted, although the audible crack of opening chutes may alert nearby enemy forces. HALO jumpers must wear special helmets attached to oxygen bottles on the descent.

HAHO - High Altitude High Opening - In which the parachutists deploy their chutes at high altitude. Using steerable chutes, HAHO jumpers can glide a long distance. The advantage of HAHO is that it allows deeper penetration of enemy territory that may otherwise be too dangerous to risk a plane over. The downside is that it requires the jumpers to work on oxygen for longer, with all the inherent risks. There is also the likelihood that the troop would get separated on the descent. To test the HAHO concept, a group of SAS parachutists once glided across the English Channel, successfully traversing the 30 miles between England and France. 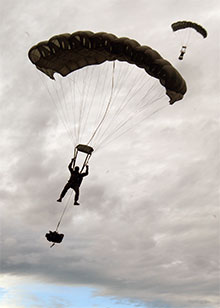 HALO jumpers - note the 'square' steerable chute and the bergens suspended beneath the troopers.

Static Line - A technique that dates back to World War 2 but still could be called on today, static line jumping is performed from a much lower altitude than HALO/HAHO and requires the jumpers to hook onto a line which automatically pulls the parachute's rip cord on exit.

For HALO/HAHO jumps SAS skydivers use square-type RAM parachutes which are more maneuverable than the standard round chutes. The square chutes also allow for softer, controlled landings. Typically an SAS parachutist will skydive with their bergen fixed to their knees, releasing and lowering it on a chord just before landing.

There's speculation that there are classified agreements between British Airways and the SAS that would allow the use of BA planes in certain circumstances to deliver men via HALO or HAHO jumps. The thinking is that a British Airways plane, probably a cargo type without passengers, may be used to deliver a covert team, perhaps faking an emergency that takes it into restricted airspace. The SAS team would stealthily deploy out from the cargo hold. Once out, the 'civilian' jet would then miraculously solve its emergency and resume course. Many BA pilots are ex-military and there's much cooperation between the SAS and the airline in the counter-terrorism arena so the idea is, perhaps, not so far fetched.

RESOURCES:
+ Do The SAS Have Bat Wings?