This site uses cookies. By continuing to use this site you consent to our use of cookies. more info | ok
british special forces » special air service » sas weapons » welrod
▼ share this page

First brought into service during World War 2, this British-designed bolt-action weapon is rumoured to still be in the 22nd Special Air Service Regiment's armoury and has been taken to war at least as recently as the 1991 Gulf War.

The Welrod was designed for use by British Special Operations Executive (SOE) agents and allied operatives. A large number of Welrods were air dropped to resitance elements in Europe during the War. It was designed to be used at extreme close quarters e.g. during assassinations, neutralising sentries, etc. It most likely has a similar role within the modern SAS. At least one Welrod was taken by SAS Land Rover columns into Iraq during Desert Storm with such a use in mind.

The Welrod is a single-shot weapon which requires the operator to manually cycle the rounds via a rotary bolt action mechanism accessed at the rear of the pistol. Magazine capacity is 5 rounds. The Welrod was typically chambered for subsonic .32 ACP rounds although a 9mm parabellum variant was later developed.

Due to its mechanical simplicity and integrated suppressor, the Welrod is extremely quiet when fired - perhaps the quietest pistol ever produced. Effective range is short, however, perhaps no more than 10 yards. 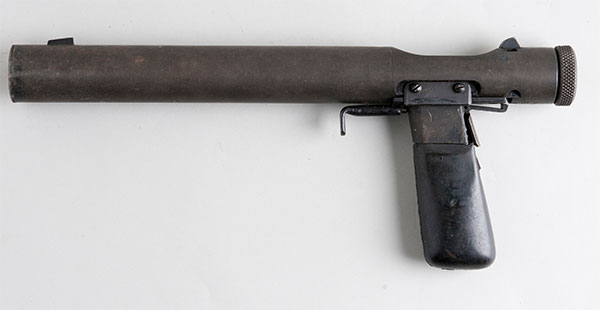 Welrod MKII silenced pistol in .32ACP. The magazine acted as the Welrod's pistol grip. When seperated from its magazine, the Welrod was well suited to being concealed and carried covertly. Even if it was seen, to the untrained eye, the Welrod did not resemble a firearm. It's nickname among some users was the 'bicycle pump'.
photo credit : Flickr user Askild Antonsen
used via Attribution 2.0 Generic (CC BY 2.0)