This site uses cookies. By continuing to use this site you consent to our use of cookies. more info | ok
british special forces » special air service » sas weapons » ugl
▼ share this page

The L17A1 UGL (Under-slung Grenade Launcher) is a 40mm grenade launcher that is in use by the UK's special forces.

The UGL is a modified variant of the Heckler and Koch AG36 and fires a range of 40mm rounds including high explosive, smoke, cs gas, baton rounds and white phosphorous.

Regular and elite forces use the UGL fitted to the SA80A2 assault rifle, in a configuration known as SA80 UGL, designated L123A2. The SA80 UGL was first seen in action in 2003's Operation Telic, Iraq.

UKSF attach the UGL to Diemaco C8 SFW carbines. Unlike the M16/M203 combination, the launcher part of the C8/UGL can be quickly removed. An SBS team reportedly did this when climbing up to the peak of mountainous valleys in Afghanistan. Doing so helped balance their load on the steep slopes.

Other elite/special UK units reported to be using the C8/UGL combination: 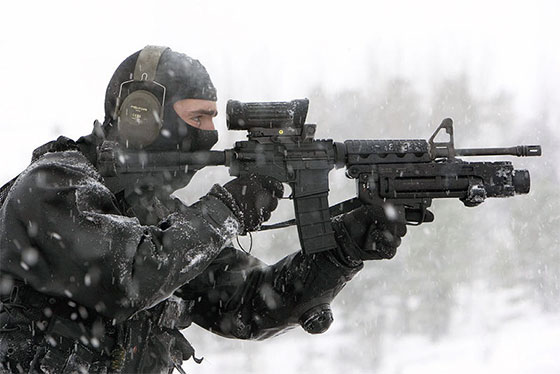 An operator from the 7th NL SBS, Royal Dutch Marines, takes aim with a Diemaco C8 carbine fitted with a UGL. The 7th NL SBS are the Dutch equivalent to the UK's SBS. During the cold war, in the event of hostilities breaking out, the Dutch SBS would have been under operational control of the UK SBS
Photo by Francis Flinch - used with thanks