This site uses cookies. By continuing to use this site you consent to our use of cookies. more info | ok
british special forces » special air service » history » kosovo
▼ share this page

The SAS In Kosovo

The NATO operation against Serb forces operating in Kosovo took place between March 24 and June 10, 1999. The 22nd Special Air Service is believed to have played a role in the NATO campaign.

"Operation Picnic" involved UK and US Special Forces operating inside Kosovo in order to gather much needed intelligence. Members of D Squadron, 22 SAS inserted into Kosovo in the early hours of March 21st, several days before the NATO bombing campaign began. Their mission was to identify Serbian units, SAM and AAA sites, supply lines and positions while remaining undetected.

They also scouted out potential invasion routes for use by NATO forces and collected photographic evidence of Serbian war crimes.

Once the air campaign began, the SAS called in air strikes against selected targets.

The SAS also reportedly trained and worked alongside specially-selected Kosovo Liberation Army (KLA) soldiers who, unfortunately for the secretive SAS, were keen to boast about the SAS presence in Kosovo. The efforts to train and equip the KLA were a joint US-UK operation and involved the US DIA and UK MI6 as well as serving and former UKSF personnel (sounds like a job for the increment?).

Despite the wish to remain low profile, there were reports of clashes between SAS units and Serbian forces. One such incident took place in near the town of Stimlje, 35 km south-west of Pristina, in April. The KLA reported to the press that a UK Special Forces patrol got into a firefight with Serb paramilitaries / special police resulting in one Serb KIA and several wounded. A Serb armoured car mounted with an anti-aircraft gun was also reportedly hit and damaged with an anti-tank rocket

sources :
the independent newspaper
scotland on sunday
the bbc

During the NATO campaign, reports surfaced that the Serbs had captured or killed a member of UK Special Forces although this has never been confirmed.

On June 12th, a British C-130K Hercules transport plane crashed shortly after take off from an airstrip in Kukes, Albania. There were no fatalities in the crash which is fought to be caused by an unsecured load in the plane's cargo. It was eventually revealed that the Hercules was operated by 47 Squadron and was thought to be on a special forces mission with soldiers from 22 SAS aboard. Some sources suggest that the SAS were en route to secure the airbase in Pristina, Kosovo, before a column of Russian armour could reach it; while others suggest the C-130 was transporting the SAS on a mission in support of Operation Picnic and in fact was also carrying US Special Forces personnel.

In March 2001 the SAS arrested a number of ethnic Albanians suspected of carrying out a bombing against Serb civilians. 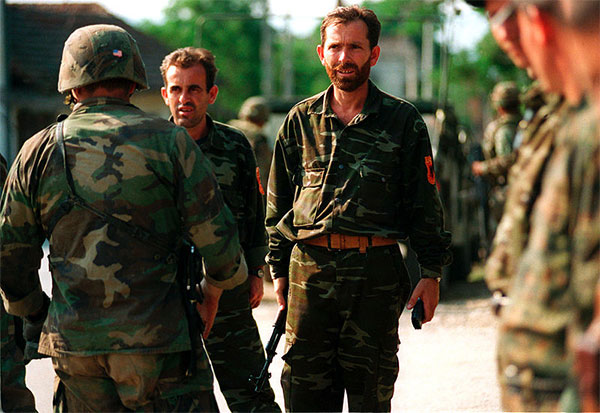 KLA soldiers with US Marines, June 30, 1999. Reports that MI6 and UKSF had funded, trained and supplied the KLA began to embarass the UK government when the KLA ended up carrying out attacks against Serb civilians inside post-war Kosovo.
photo : US DoD

« back to SAS history