This site uses cookies. By continuing to use this site you consent to our use of cookies. more info | ok
british special forces » special air service » sas weapons » stun grenade
▼ share this page 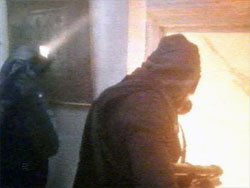 The blinding flash and deafening bang of stun grenades give an SAS entry team a few vital seconds advantage when clearing a room.

When the Special Air Service set up its Counter Terrorist unit, the CRW wing, it sent a specification for a stun device to Royal Ordnance Enfield. The result was the G60 stun grenade, or 'flash-bang'.

The aim of the flashbang is to disorientate and distract hostiles in a room, giving the entry team a few precious moments in which to enter and neutralise any threats. Since its development in the late 70s, the flashbang concept has been adopted by many militaries and police forces around the world.

The stun grenade contains a mercury and magnesium powder which upon detonation creates a blinding flash, equivalent to 300,000 candlepower. The 160 decibels of sound produced by the grenade not only shocks and stuns but is also loud enough to disrupt the balance function of anyone in range, causing severe dizziness. Modern stun grenades have evolved to detonate multiple times and can contain irritants such as CS or CN tear gas. SAS assaulters become gradually conditioned to the effects of flash-bangs during training. Their equipment also protects them : tinted eye pieces in SF-100 respirators protect against the flash and the respirator itself guards against the effects of the smoke and gas released by the grenades, whilst ear defenders with active microphones protect the trooper's ears from the deafening sound of the grenades while maintaining the ability to hear low level sounds.

The SAS used their flash-bangs when they assisted German special forces (GSG-9) as they stormed a hi-jacked airliner at Mogadishu airport in 1977. As the GSG-9 team assaulted the plane, 2 SAS men hurled flash-bangs towards the cockpit, causing confusion within. The Regiment used stun-grenades during its breaking of the Iranian Embassy Siege in 1980 and again at Peterhead Prison.

The SBS also use the flash-bang in the maritime counter-terrorist role. Like much of their gear, SBS flash-bang's are water-proof.

Undercover operators in the SRR and their predecessors, the Det, carry/carried flash-bangs, mostly as a method of breaking contact when ambushed.