This site uses cookies. By continuing to use this site you consent to our use of cookies. more info | ok
british special forces » special boat service » operations » fanning head
▼ share this page
note: www.specialboatservice.co.uk content has been moved to this section

A crucial phase of the British campaign to retake the Falkland Islands from their Argentinean invaders was about to get under way. An amphibious landing force was preparing to deliver troops into San Carlos Bay, which would become the bridgehead via which the Islands would be retaken.

Of concern to the British planners was an Argentine position placed atop Fanning Head, a high ridge that overlooked San Carlos Waters. Radio transmissions had been detected, from an Argentine call sign of 'EC Hermes'. Believed to be half-company sized and covering the approaches to the landing areas with heavy weapons, the Argentine presence was a significant threat to the landings.

The task of clearing Fanning Head fell to 3 SBS, supported by HMS Antrim. The Argentine position was located by using a thermal imaging device attached to Antrim's Wessex helicopter. An SBS assault force of some 25 men, many armed with GPMGs, was delivered into the vicinity, piecemeal, by Wessex helicopter.

Maps of the Fanning Head operation: 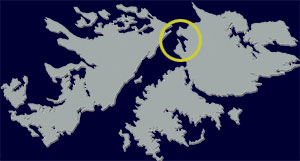 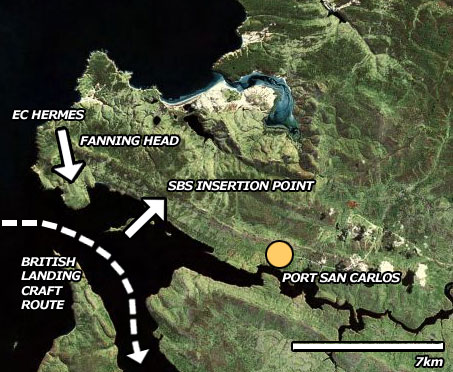 Accompanying the SBS was Captain Hugh McManners, a Naval Gunfire Forward Observation (NGFO) specialist from 148 Commando Forward Observation Battery who was expert at directing artillery fire from Antrim's main gun, and Caption Rod Bell, a Spanish-speaking expert at psychological operations, who hoped to persuade the Argentine forces to surrender.

As the SBS approached the enemy positions, Captain Mc Manners directed artillery fire onto the target. Upon reaching the target area, the SBS lined up and aimed their GPMGs towards the enemy forces. Hoping that the shelling the Argentineans had suffered would be enough to break their morale, Captain Bell, called out in Spanish for the Argentines to surrender. The response from the enemy positions was a volley of machine gun fire. With that, the SBS countered with sustained fire of their own, raking the Argentineans with GPGM fire as well as m203 grenade launchers and LAW rockets.

The SBS moved forward, getting within hand grenade range of the Argentine positions before those surviving defenders chose to surrender. The SBS and naval artillery had killed 11 of the 60 Argentineans, 6 had surrendered and the rest had fled. The SBS had suffered only light injuries.

One interesting event is reported to have happened the following morning as the landings got under way. A pair of Argentine attack jets came screaming up the valley and flew over Fanning Head, seeking to attack the landing force. The SBS who were now covering the landings from the Argentinean defenses opened up with small arms fire, bringing down one of the jets.