This site uses cookies. By continuing to use this site you consent to our use of cookies. more info | ok
british special forces » special boat service » operations » fox bay
▼ share this page
note: www.specialboatservice.co.uk content has been moved to this section

With the British now firmly established on East Falklands, the Argentinean battalion stationed at Fox Bay, West Falklands, could be mustered to attack the British flanks as they prepared to march on Stanley. Something had to be done to harass the Argentinean forces in the area and keep them occupied. Without wanted to commit a large scale unit to attack Fox Bay, the British planners decided to use a deadly combination of Naval gunfire and special forces.

A team of 2 Naval Gunfire Support (NGS) specialists from 148 Commando Forward Observation Battery escorted by a 5-man SBS delivery and protection team were inserted 5 miles south of West Head by HMS Plymouth. The 148 Commando team was led by Captain Hugh McManners, who had accompanied the SBS on their mission to clear Fanning Head. The team was loaded into a Gemini Rigid Inflatable for the perilous journey. The SBS took a route that followed the coast as this way, to any enemy radar operator they would be hidden amongst the 'clutter' of the coastline. Whilst stealthy, the route caused other problems - a thick seaweed-like type of marine-life known as Kelp clogged the boat's outboard motors. The Kelp was so thick close to their proposed landing point that the team decided to update their plans and set up their OP (Observation Position) on Knob Island, overlooking Fox Bay West & Fox Bay East.

Once Knob Island had been checked out by the SBS, the observers from 148 Commando manned their OP and plotted a list of targets, radioing them back to HMS PLymouth, which took up position on its gun line. With corrections provided by 148 Commando, Plymouth shelled Argentinean fuel stores and ammo dumps. Naval artillery is more accurate than field artillery thanks to a gyroscopically stabilized gun and a computerized aiming system. The ship's main gun can also fire repeatedly. putting many rounds down per minute. The effect of such a powerful weapon system under the direction of highly trained men on the ground caused much consternation and confusion amongst the Argentinean positions.

Maps of the Fox Bay operation: 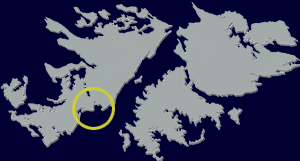 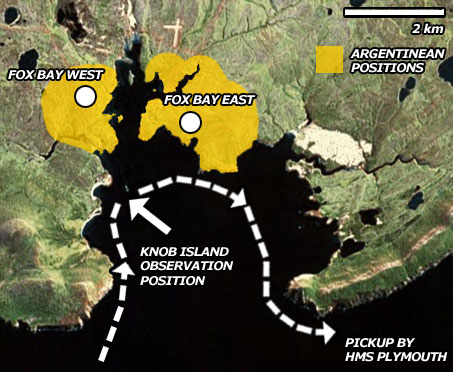 The artillery mission complete, the SBS now had the challenge of getting themselves and the FO team back safely. Due to problems with the outboard motors on their boat, and facing strong winds and currents, the SBS fashioned a sail out of crossed paddles and a poncho. The Argentinean forces at Fox Bay, now truly riled up from the shelling, were firing AAA and machine gun fire out to sea in the hope of hitting HMS Plymouth. Whilst this fire was wild and blind, it did stray close to the SBS/148 team, adding as little colour to their evening. McManners retaliated by calling in more naval gunfire to cover their escape. It was a hard slog, but eventually the team was picked up by HMS Plymouth and both the SBS and 148 Commando got some well-earned sleep.

The Fox Bay operation was followed the next night by a mission to Port Howard by another SBS/148 team.