This site uses cookies. By continuing to use this site you consent to our use of cookies. more info | ok
british special forces » police special operations » sCO19 » weapons
▼ share this page

SCO19 ARV, TST and CTSFO teams have been trained to use a range of firearms.

The 9mm Glock self-loading pistol is a proven, reliable and accurate handgun. It has a 17-round magazine and incorporates a trigger safety mechanism that negates the need for an external safety selector. It is the standard sidearm for all SCO19 Authorised Firearms Officers (AFO). 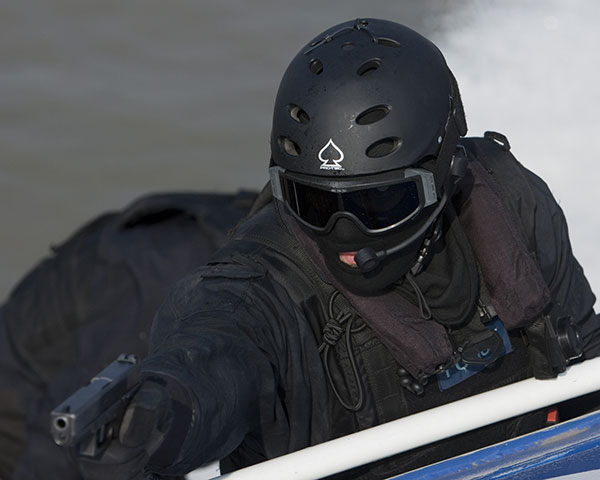 A SCO19 CTSFO takes aim with a Glock 17 self-loading pistol during a security drill ahead of the 2012 London Olympics.
photo by POA(Phot) Terry Seward © UK MOD / Crown Copyright 2012
used under open government licence

The Heckler and Koch (H&K) MP5 is ubiquitous amongst armed police units around the world. It is ergonomic, accurate and reliable. The MP5 is generally designated as a submachine gun (SMG) but in UK Police usage it is always referred to as a carbine. Unlike the versions used by the SAS/SBS, all MP5s used by British police are single fire / semi-automatic only (although rumours persist that SCO19 has access to fully-automatic MP5s). Hollow-point rounds are used to prevent over-penetration i.e. rounds passing through a target or wall and hitting a bystander. It is common for SCO19 MP5s to be augmented with torches attached to the fore grip.

The variants used by SCO19 include the MP5SFA3 (retractable stock) and MP5SFA2 (fixed stock). Pictures of SCO19 at the Stockwell shootings in July 2005, showed several officers brandishing MP5ks, a cut-down MP5 that can be carried concealed beneath clothing. There are also rumours that SCO19 has a number of semi-auto MP5SDs - the MP5 variant with an integral suppressor.

The 5.56x45 mm bullets fired by the G36 have more range and stopping power than the 9x19mm rounds in the Glock pistol or MP5 smg. They also stand a better chance of penetrating into a vehicle and so are often carried in ARVs for just such contingencies. As with their MP5s, SCO19 G36s are fitted with single-fire trigger groups. SCO19 have been pictured with both the G36K carbine and the even shorter G36C variant. It is understood that SCO19 will be phasing out the G36 in favour of the Sig 516 and MCX carbines (see below).

The Sig Sauer SG516 is a semi-automatic 5.56mm x 45mm gas-piston-operated rifle reportedly used by some ARV, TST and CTSFO units. Recent pictures of SCO19 SG 516s weilded by CTSFOs have shown the CQB variant, which features a 10 inch barrel. Variants with longer barrels (up to 18 inches) may be used by Rifle Officers.

Made by Sig Sauer, the MCX is a carbine chambered 5.56x45mm NATO. SCO19 officers have been spotted with MXC carbines featuring a 11.5 inch barrel, telescoping stock and red dot sight.

One more step up, in terms of firepower, from the G36 and SG 516, the 7.62x51mm HK G3 was a favourite weapon of the SAS and 14 Int in Northern Ireland. SCO19 employ a single-fire variant, the G3K, as a sniper and assault rifle. The G3K features a telescopic stock, folding bipod and 322mm barrel When used by SCO19 Rifle Officers in the marksman role, the telescopic stock is replaced by an ergonomic stock from a PSG1 and a Schmidt & Bender Flashdot scope is used.

Loaded with 12-guage buck-shot or special tear gas or breaching rounds, the Beneill is a versatile weapon. The Benelli performs a similar role for SCO19 that the Remington 870 does for the SAS.

When non-lethal force is required, the X26 taser fires 2 short probes, on the ends of wires, into the suspect's clothing or skin. High voltage electric impulses incapacitate the target by disrupting their central nervous system. The X26 has an effective range of 10 meters.

Since late 2002, SCO19 officers have been equipped with this 'less lethal' weapon. The HK is a 40mm riot gun that fires a plastic baton designed to stun and incapacitate a suspect, allowing for their arrest in cicumstances where more lethal weapons would otherwise have been required. The HK69 is aimed via red-dot sight and has an effective range of 25 meters.