This site uses cookies. By continuing to use this site you consent to our use of cookies. more info | ok
british special forces » special air service » sas history » bosnia
▼ share this page

The Special Air Service carried out a number of operations in the troubled Balkan state of Bosnia during the mid nineties.

As part of a larger United Nations (UN) operation in the trouble Balkans, D squadron SAS were deployed to Bosnia on 'stand-by' duties - on alert to respond to any significant event. The UN mission was led by General Sir Michael Rose, an ex-SAS man himself. When the Bosnian Croats and Muslims were getting close to border agreements, Rose called in additional SAS forces, in the form of A Squadron, to assist him with gathering intel in support of his task of mapping out the disputed territories. Rose understood that the SAS were highly capable of carrying out this sensitive operation in the short time window available.

Elements of A Squadron subsequently covertly inserted into Bosnia, masquerading as the SAS signals Squadron, then deploying as United Kingdom Liaison Officers (UKLO) working for the UN. To better blend in with other regular forces, the SAS men wore blue UN berets and carried standard issue weapons such as SA80 assault rifles. Once deployed, the SAS used their UKLO remit as a cover to carry out several intelligence gathering operations, essentially becoming Rose's eyes and ears in the region. Tasks reportedly performed included: 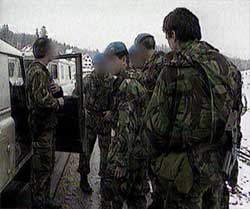 Surrounded by Serbian fighters, this besieged town, home to Bosnian Muslims, was a focal point in the conflict at that time and virtually no news was coming out. A small SAS unit made a highly dangerous helicopter night insertion into the town. Thanks to some superb flying by the Dutch helicopter crew, the SAS were able to reach the Muslim forces, establish a clear situational picture and report back to Rose via tacsat.

Rumors of Serb atrocities against the Muslim population in and around the town of Gorazde promoted Rose to send the SAS in for a look. Once inside, the SAS took up position in a Bank and called in regular sit reps.

An SAS trooper was killed when his land rover was shot up when attempting to find a route of the town.

During a Serbian attack, SAS-controlled NATO air strikes were called in against Serbian tanks and artillery. During these strikes, a British Royal Navy FAA Sea Harrier was shot down by a Serbian SAM. The pilot ejected and linked up with the SAS.

Eventually, the SAS, with Royal Navy pilot in tow, manage to exfiltrate the area on foot for eventual pickup by helicopter.

An SAS team infiltrate through Serbian lines to reached the city of Sarajevo, which was surrounded by Serbian forces. Once inside, the SAS called in NATO air strikes against Serbian positions.

Post war, the SAS returned to Bosnia for a series of missions to arrest suspected war criminals.