This site uses cookies. By continuing to use this site you consent to our use of cookies. more info | ok
british special forces » special air service » sas operations » gambia
▼ share this page

It's testament to the faith that the then British Prime Minister, Margaret Thatcher, had in the Special Air Service that when, in the early 80s, a crisis erupted in Africa, just 2 SAS men were sent in to help reverse a coup and rescue the family of a President.

Dateline : August 1981
When the President of The Gambia, Sir Dawda Jawara, came over to England to attended the Royal Wedding of Prince Charles and Lady Diana Spencer, Left-wing rebels back home took advantage of his absence and launched a coup d'etat against his government. The rebels had captured the capital, Banjul, taking over its radio station and airport. In addition, rebel forces took the President's wife, Lady Jawara, and family hostage. Of further concern to the British, were a large number of British citizens who had been caught up in the escalating violence and lawlessness that had taken over the capital.

Jawara headed back to Africa to try an reclaim power, but not before asking the British government for assistance.

The SAS go in

2 SAS men, one a Major, one a Seargent, where assigned the task of entering The Gambia and running a low key operation to help reinstate Jawara's government and secure the safety of the President's family and any British citizens. 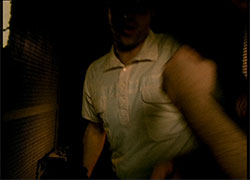 A BBC film crew caught a brief glimpse of one of the SAS team in a Gambian armoury following the coup.

The 2 SAS men, dressed in civilian clothes and armed with MP5s and Browning 9mm pistols, and hand grenades were flown covertly into Senegal, the former French colony that neighboured The Gambia, their weapons secreted in Diplomatic bags. Crossing the border into the The Gambia, the SAS men linked up with Clive Lee, an ex-SAS Major who was working for the Gambians. The 3 Britons then joined forces with Senegalese Paratroopers who had been drafted in to quash the coup. Within short order, small groups of rebels were being captured and handed over to the Senegalese troops who seemed as mystified as to who was doing it as the rebels themselves. Quickly the tide had turned, the Radio station and Airport soon fell, and the Rebels' grip on the capital was loosening.

Moving on to their other objective, the safety of Lady Jawara, the SAS men learned that, due to illness, she and her 5 children had been moved to a British-run hospital where she was under armed guard. The SAS made contact with some of the medical staff and convinced them to help resolve the situation without bloodshed. The doctors were able to draw out the hostage's treatment, keeping them in the lightly-guarded clinic whilst the SAS could arrange for a rescue bid. The resourceful doctors were also able to convince the guards inside to leave their weapons out of reach, claiming they were frightening the patients.

As the Senegalese forces routed the remaining Rebels, the SAS stuck around only long enough to ensure that no British citizens needed assistance, before quietly flying back to Britain.

The Gambian operation had proven that a couple of well-trained special forces troops could covertly affect the fate of an entire nation.