This site uses cookies. By continuing to use this site you consent to our use of cookies. more info | ok
british special forces » special air service » sas operations » operation flavius
▼ share this page

Operation Flavius - The SAS In Gibraltar

In March of 1988, British Intelligence became aware of an IRA plot to attack a parade of British military bands in Gibraltar. An SAS unit was tasked with intercepting the IRA cell. The SAS mission was code-named 'Operation Flavius'.

Based on intelligence, the British believed the PIRA planned to set off a bomb in Gibraltar. For some weeks, Spanish security services had been watching a 3-person cell as it gathered in Spain. The PIRA Active Service Unit (ASU) was made up of 2 men and a woman - Danny McCann, Seán Savage and Mairéad Farrell. It is believed that they planned to cross over into the British Territory of Gibraltar, place explosives in the boot of a car at the assembly point for a scheduled parade and detonate it remotely. To guarantee the best spot, the ASU reserved a suitable location by parking a 'clean' car in it until they were ready to replace it with the one rigged with explosives. The location was next to Inces Hall, where the band and soldiers for the parade would be mustered.

On March 6th, Savage was spotted parking a white Renault car, arousing suspicions that it might be carrying explosives. This intel was quickly followed by reports that McCann and Farrel had crossed the border from Spain into Gibraltar and were heading into the town. They were kept under surveillance by intelligence operatives. Some reports suggest that 14 Intelligence Company were involved in tailing the IRA cell around Gibraltar.

At around 14:50, Savage was seen linking up with McCann and Farrell . They were observed conversing and looking intently towards where the white Renault had been parked. The trio eventually moved away from the area but soon returned and were again observed paying close attention to the parked car.

The IRA team then split up again with Savage heading back into town and the others heading towards the border with Spain.

When the IRA cell were clear of the parked car, an Army explosives expert did a walk-by to look for tell-tale signs of a car bomb (exposed antennas, wires or depressed axles from a large weight in the boot). No such signs were visible, although the car still could have been rigged with a light-weight plastic explosive such as semtex. The car's radio aerial did arouse some suspicions. 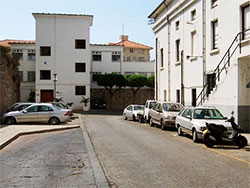 Those overseeing the operation made the decision that the parked Renault probably contained a bomb. Once the identities of the 3 suspected IRA members had been positively confirmed the local police chief signed over control of the operation to the SAS who were to move in and attempt to arrest the IRA unit.

The SAS troopers were dressed in civilian clothing. They were fitted with covert radios and carried 9mm Browning High Power pistols concealed beneath their clothing. The SAS team split into groups in order to follow both Savage and McCann and Farrel.

As the SAS teams prepared to move in, a local police officer, caught up in traffic and running late, put on his car's siren. The sound of the siren caused McCann and Farrel to react, glancing around nervously. It was at this moment that McCann reportedly made eye contact with one of the SAS men who were shadowing them, not much more than ten meters away. According to the trooper's account, he drew his pistol and was about to issue a challenge when McCann made a move with his hand across the front of his jacket. Fearing the IRA man was either going for his own gun or for the car bomb's remote detonator, the SAS man opened fire at once. McCann went down, hit with several shots. Farrel was said to have gone for something in her bag, resulting in her also being shot. A split-second after the initial engagement, a second SAS man had drawn his pistol and shot both McCann and Farrel.

Further down the road Savage, alerted by the sound of the shooting, turned and was issued a challenge by the other 2 SAS troopers who had their pistols trained on him. According to the SAS men's statements Savage ignored the challenge and moved to reach inside his jacket. He was killed by a volley of shots as both SAS troopers opened fire on him.

As police cars approached the scene of the shootings, the SAS put on Berets and arm-bands to identify themselves.

Praise over what was at first seen as a highly successful mission to stop a terrorist attrocity quickly turned into controversy. It transpired that none of the 3 IRA members had been armed and no remote bomb trigger was found. Furthermore the Renault that Savage had parked in town contained no explosives.

What was now seen by some as a summary execution by the Army of unarmed terrorists was a propaganda coup for the IRA.

A bomb full of explosives and linked to the IRA trio was eventually found in Spain. It's now thought that Savage had been using the Renault to reserve the spot for the actual car bomb to be later parked in.

A subsequent inquest found that it was technically possible for the IRA cell to have remotely triggered a car bomb from the location of the shootings.

The families of the Savage, McCann and Farrel took the case to the European Court of Human Rights. In 1995 the court found that the British Government had violated Article 2 of the Convention. It also ruled that the three had been engaged in an act of terrorism, and consequently dismissed unanimously the applicants’ claims for damages and costs.