This site uses cookies. By continuing to use this site you consent to our use of cookies. more info | ok
british special forces » royal marines » mountain leaders
▼ share this page

Mountain Leaders are an elite cadre of Royal Marines who are experts in long range reconnaissance, arctic warfare and mountain climbing. As the The Mountain Leader Training Cadre (MLTC), their primary peacetime role is to teach their techniques to other Royal Marines and share their expertise with other military units. 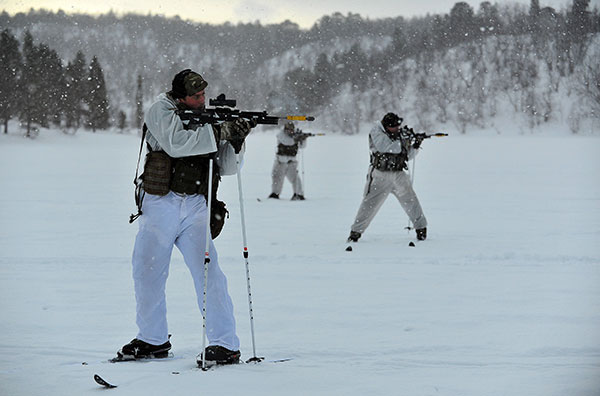 In their operational role, Mountain Leaders carry out Intelligence Surveillance Target Acquisition Reconnaissance (ISTAR) operations and lead mountain routes and cliff assaults for 3 Commando Brigade. They form the nucleus of the Brigade Patrol Troop (BPT) and may also be found in each Commando's Recce Troop.

Mountain Leaders are not strictly-speaking Special Forces, even though their standards of selection and training are considered by some to be as hard, if not harder, than UKSF units. Mountain Leaders are under the control of 3 Commando Brigade, not UKSF.

The unit's history can be traced back to the Cliff Assault Wing formed in the 1950s, later to become the Cliff Assault Troop. These 'Cliff Leaders' were tasked with leading the Commando units up cliffs and operating in arctic conditions. The appropriate skills and techniques were developed and perfected and then passed on the rest of the Royal Marines. The Cliff Assault Troop was renamed to the Reconnaissance Leader Troop in 1965 until 1970 when it was renamed again to the Mountain & Arctic Warfare Cadre. The M&AWC helped prepare 3 Commando Brigade for its cold war role, protecting NATO's northern flank. Were war to break out, the M&AWC would provide long range arctic reconnaissance to 3 CDO BDE, operating on foot and on skis.

When Argentina invaded the Falklands in 1982, the M&AWC reconfigured from training to a war footing, raising patrols for 3 Commando Brigade. Following the main amphibious landings on May 21st, 4-man patrols were inserted onto the islands where they carried out recce missions, augmenting the SAS and SBS patrols already operating. Their war was not limited to reconnaissance, however. 10 days after the main landings, the M&AWC engaged in a fierce firefight with Argentine Special Forces at Top Malo House.

The Brigade Reconnaissance Force (BRF) was raised in the early nineties to fill the need of a permanent medium recce force for 3 Cdo Bde. Mountain Leader NCOs were used to command these patrols, which eventually became known as the Brigade Patrol Troop. Other MLs remained in the training role, in the form of The Mountain Leader Training Cadre (MLTC). 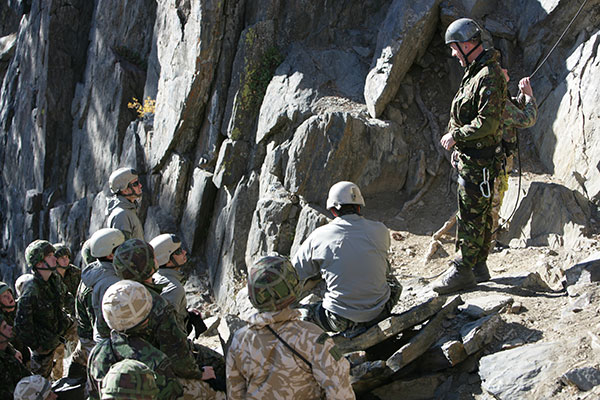 MLs are trained by Mountain Leader and Combat Intelligence Company based at Commando Training Centre Royal Marines, Lympstone and at various field locations. There are several classes of Mountain Leaders, each qualified to a different level with ML3 being the most basic, then ML2, then ML1, the most advanced.

In 2012 the Royal Marines opened the Mountain Leader branch to all Marine-level ranks via the new ML3 course. ML3s are instructed in surveillance, close target reconnaissance and vertical assaults.

An initial Mountain Leader Selection course is followed by an 8 week ML3 course that includes a week of cliff climbing in Cornwall, mountain climbing in North Wales and the highlands of Scotland.

Once qualified, a Mountain Leader (ML3) will usually be integrated into the Commandos, often into the Reconnaissance Troops. Once a Marine achieves the rank of Corporal, they can undergo the ML2 course.

The 34 week ML2 training course is open to Royal Marines with rank of Corporal or above. They must have passed a Junior Command Course and an initial Mountain Leader Selection. The ML2 course covers:

The 36 week ML1 course is open to SNCOs with a minimum of 2 years in the ML2 role. It covers: