This site uses cookies. By continuing to use this site you consent to our use of cookies. more info | ok
british special forces » uksf aviation » 815 nas
▼ share this page

815 Naval Air Squadron (815 NAS) is a Fleet Air Arm squadron that operates the Wildcat HMA 2 helicopter out of RNAS Yeovilton in Somerset.

The squadron is made up of an HQ element and 16 Small Ship's Flights, the bulk of which deploy on Type 23 Frigates and Type 45 Destroyers. Each flight is made up of a single helicopter, 2 aircrew (pilot + observer) and a supporting element of 7 engineer technicians.

Note: the squadron previously flew Lynx Mk.8 helicopters before converting to the Wildcat.

815 NAS includes a specialised sub-unit that is made up of 2 double-manned flights and is designated as the Maritime Interdiction (MI) Flight (previously known as B Section). The MI flight provides specialist support to Maritime Interdiction operations, including Counter Narcotics, Counter Piracy and Maritime Counter Terrorism (MCT).

Along with a flight of Merlins from the Commando Helicopter Force, also based at RNAS Yeovilton, 815 NAS MI Flight is on a very high readiness footing to support United Kingdom Special Forces (UKSF) MCT operations. This role would typically entail providing top cover and/or troop insertion/extraction for the Special Boat Service as they take a MCT objective such as a cargo ship, ferry, oil rig etc. 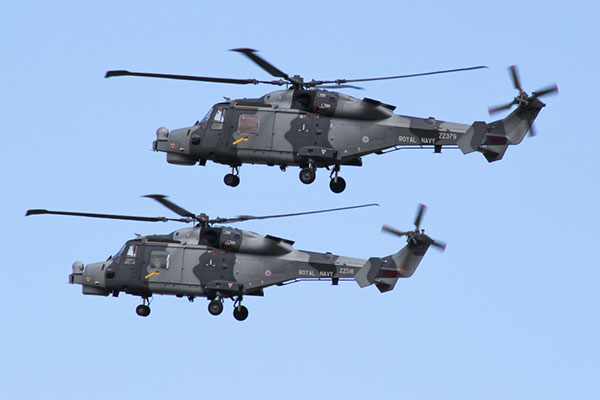 A pair of 815 NAS Wildcat HMA 2 helicopters pictured in flight. The aircraft carries a Seaspray 7400E radar under its chin and a Wescam MX-15 electro-optical/FLIR camera on its nose. In the Maritime Interdiction role a Royal Marine door gunner may be on board to provide cover with a M3M HMG. A 43 Commando Maritime Sniper Team (MST) is another option. During UKSF MCT operations, a SBS sniper may situate himself in the open cabin doorway to provide overwatch.
image by flickr user Mark Harkin | Used with Attribution 2.0 Generic (CC BY 2.0) license 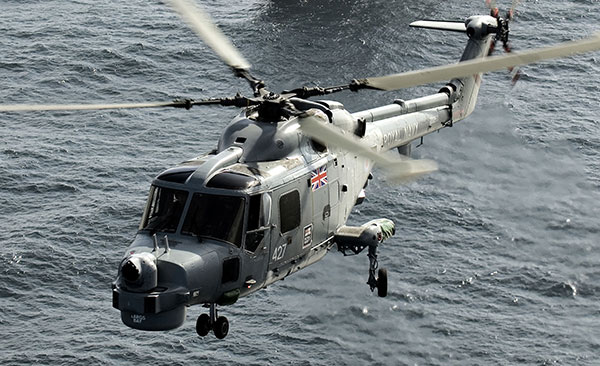 A Lynx HMA.8SRU helicopter of the type once operated by 815 NAS. The aircraft featured a Sea Owl Sea Owl thermal imager atop its nose and a Seaspray Mark 1 360° radar beneath it. In its maritime attack role it was able to carry an array of weaponry that included Sea Skua anti-surface missiles, Mk44 or Mk46 torpedoes, Stingray torpedoes and MK II depth charges. The Lynx HMA.8SRU could carry up to 9 troops and had the ability to deploy them via fast-rope. 815 NAS was the last squadron to convert to the Wildcat.
image by LA(Phot) Steve Johncock  | © UK MOD / Crown Copyright 2009
Used under Open Government Licence