The first line of defence for a terror attack in the UK is the police force. Before any of the military units detailed later in this article can go into action on UK soil, authorisation to do so must be given by civilian authorities. This authorisation usually comes from a crisis response committee held in special conference rooms in Whitehall. Sometimes referred to as COBR or COBRA, these committees are headed by the Prime Minister or other top civilian leaders. COBRA analyses the level of threat and determines how to respond. As the politicians and security chiefs sit in committee, it will be the police on the scene of a terrorist incident who will be the first responders.

Each United Kingdom police constabulary maintains a specialist firearms capability with tactical team members trained to Authorised Firearms Officer (AFO) standard or higher. AFOs are roled with carrying out law enforcement operations outside the capability of regular, unarmed officers. AFOs in an Armed Response Vehicle (ARV) unit would typically be the first armed police unit to arrive at the scene of a terrorist attack.

Some police services, such as the Metropolitan Police Service's SC&O19 Specialist Firearms Command, have officers trained to Counter Terrorist Specialist Firearms officer(CTSFO) level. CTSFOs are trained in hostage rescue, rappelling, fast-roping and dynamic entry - including the use of explosives.

The numbers of CTSFOs are on the rise and their training makes them more capable of dealing with the sort of scenarios that were previously the sole domain of military special forces such as the SAS. Indeed, if a similar scenario to the 1980 Iranian Embassy siege happened today in London, it is probable that it would be SC&O19 CTSFOs who would intervene.

CTSFOs from police services around the country are linked together in a national CTSFO network. This organisation of interopable CTSFO teams has been established in order to provide a national-level counter terrorism response.

Another police unit that has a counter terrorism role is the British Transport Police (BTP) Counter Terrorism Support Unit who guard the rail network.

note: in 2015, London tactical units including from SC&O19 and BTP CTSU took part in a 2-day exercise to test the capital's response to an attack by terrorist gunmen. more info: Operation Strong Tower

The Tactical Support Group of the Ministry Of Defence Police (MDP) is a swat-style unit that is protects Atomic Weapons Establishments. Training includes hostage rescue and the recapture of stolen nuclear weapons.

Other Police CT elements include S015 Counter Terrorism Command which absorbs the former SO12 Special Branch (SB) and SO13 Anti-terrorist Branch (ATB) units. SO15's primary role is gathering intelligence and carrying out investigations related to terrorism. Intel provided by SO15 is often the catalyst for pre-planned CT operations.

In the event that the civilian authorities decide to call on the military to resolve a terrorist incident, there are a number of units who train for the CT role.:

The UK military's primary counter-terrorism unit is the Army's 22nd Special Air Service. At any time, one full SAS Squadron (around 60 men), designated the Special Projects Team, is on standby to respond to a terrorist incident. Squadrons rotate into the CT role on a six-monthly basis. The SAS wrote the book on rescuing hostages from buildings, planes, trains and vehicles.

The SBS has a dedicated counter-terrorist unit, designated M Squadron. M Squadron specialises in Maritime Counter Terrorism (MCT) and have developed techniques and equipment for the challenging task of carrying out hostage rescues on oil rigs, cruise ships, ferries and other maritime objectives. 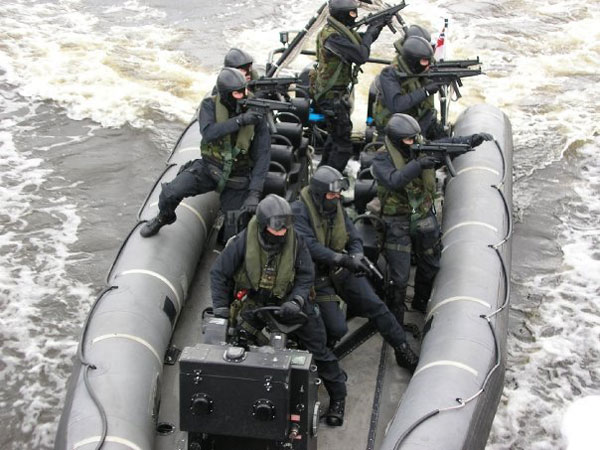 SBS Maritime Counter Terrorist (MCT) operators aboard a VT Halmatic Arctic RIB (Rigid Inflatable Boat). SBS MCT units wear similar clothing to their SAS counterparts, with the addition of Gecko helmets, life jackets, emergency oxygen bottles and other safety gear. The MP5 A3 9mm sub machine gun with Sig Sauer P226 pistol as secondary is a typical configuration. The SBS can approach a MCT objective via surface boats, helicopters or from beneath the water using SDVs / swimming up from submerged Royal Navy submarines.

There are several RAF / AAC / RN units that are trained to insert / extract and otherwise support UKSF counter terrorism operations.

The Hercules cargo planes operated by 47 Squadron can transport an SAS CT team and all its equipment to anywhere in the world. SBS MCT teams, along with their inflatable boats, can be air dropped into the ocean from the C-130's rear ramp

M flight, within 848 NAS of the Commando Helicopter Force, provides support for the SBS MCT Team with its Sea King HC.4 helicopters.

MCT support is also provided by a flight of Lynx Mk8 helicopters from 815 NAS.

A vital component of any CT operation is intelligence. A successful assault on a CT objective requires detailed planning bases on intel on the objective itself, the terrorists, the hostages and a host of other information. UKSF includes a number of elements with the ability to gather such intel.

Specialising in providing 'eyes on' intelligence.