This site uses cookies. By continuing to use this site you consent to our use of cookies. more info | ok
british special forces » royal marines » 30 commando » y squadron
▼ share this page

The Royal Marine Communication Technicians (RMCT) of Y Squadron provides a Electronic Warfare and Signals Intelligence (EWSI) capability for the brigade. They deploy as 3-6 man Radio Recce Teams (RRT) alongside frontline brigade elements and employ sophisticated equipment to listen in on enemy communications, which can include radio and mobile phone transmissions.

Y Squadron RRTs embed with 3 Commando's Brigade Reconnaissance Force (BRF). They provide an electronic screen out to 5 kilometers, monitoring the radio spectrum and indicating the enemy's positions by tracking their signals. Y Squadron RRTs use portable listening equipment, such as the RESOLVE EW Manpack system, to monitor enemy radio traffic. The same gear can be used in direction finding operations in which the position of the enemy can be determined by triangulating their signals using several EW receivers. 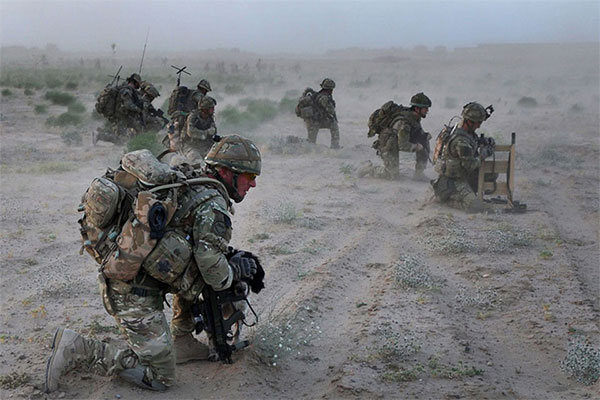 Royal Marines from 30 Commando pictured during an operation in Helmand Province. Y Squadron radio reconnaissance teams scan the airwaves for Taliban transmissions. Analyzing the enemy's radio chatter can help determine their disposition, tactics and warn of imminent attacks. They can also be traced back to their source and used to pinpoint the enemy's location.
Image by PO(Phot) Burke | © UK MOD / Crown Copyright 2011
Used under Open Government Licence