This site uses cookies. By continuing to use this site you consent to our use of cookies. more info | ok
british special forces » special air service » training
▼ share this page

Having passed the grueling selection process and earned their SAS wings, the SAS newbie enters a training phase that, in some respects, never ends. SAS troopers are constantly learning new skills and refining those already learned.

One squadron (A,B,D or G) is designated for counter-terrorism (CT) duties. The role is rotated through the squadrons every 6 months. After getting up to speed with CT techniques, the active squadron splits into two sections. One carries out training at the various SAS training facilities and is on standby for immediate response to a terrorist incident. The other takes part in exercises and is on 24 hour warning to respond.

The SAS do much of their CT training in a specially constructed house at SAS Headquarters, called the 'Killing House'. Featuring movable partitions, rubber-coated walls to absorb live rounds and extractor fans to clear out the gun fumes, the killing house can be configured to emulate various scenarios. The Killing House is used to hone the SAS trooper's Close Quarter Battle (CQB) skills. CQB techniques are practised over and over until the various drills become second nature. Room entry techniques are perfected. The SAS troopers will learn how to deploy stun grenades, tear gas, door and wall breaching explosives, shotguns loaded with hinge-busting Hattan rounds - all designed to give the assault teams the edge in siege busting operations. Once the CT teams have devloped the disciplines requried, they will begin to train with live ammunition. Members of the assault teams will take turns at playing hostages whilst their colleagues burst into the room. firing live rounds into targets sometimes very close to them. The Killing House is wired with cctv cameras so the assaults can be watched back and analysed.

The Killing House is also used by the Counter Revolutionary Wing to train for various close protection scenarios.

When they need to practise getting into buildings, the SAS will use specially built buildings on which to play. Training includes :

The SAS use a multi-story building nicknamed 'the Embassy' to practise assaults. On at least one occassion, the SAS have practised assaults on condemned buildings, including blocks of flats.

Terrorists have been known to take hostages aboard trains, buses and coaches. The SAS train constantly in assaulting such targets. SAS training facilities include a stretch of railway tracks complete with railway carriages for which to practise storming hijacked trains.

The SAS train for assaulting hijacked aircraft using a mock up of a passnger airliner at the training ground at Pontrilas, Herefordshire (see image below). The Killing House can also be configured to emulate the interior of airliners. Frequent exercises involving real-world aircraft (usually provided by British Airways) take place, complete with role-playing terrorists and hostages. 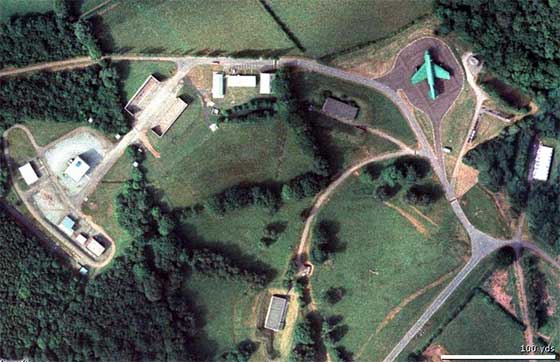 SAS training area at Pontrilas, Herefordshire, featuring a mock-up of an airliner which the SAS use to practise hostage rescue operations. More details can be found at : secret bases

Training in the killing house and in aircraft mock-ups can only do so much. The SAS frequently stage full-scale counter-terrorism exercises. These often include all the players that would be present in the real thing - police, politicians, negotiators, actors playing terrorists and hostages and, of course, the SAS. Such exercises are designed to simulate as closely as possible the environment of a real incident so all the elements can be tested, procedures refined and lines of communications established. As with real-life, the SAS may find themselves sitting around for days whilst the civilian authorities attempt to peacefully resolve the situation. Patience is a skill that all SAS troopers have to learn.