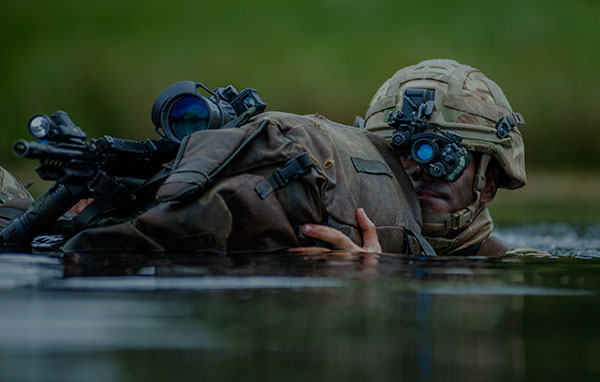 A member of a 4/73 Bty Surveillance and Target Acquisition patrol crosses a river during an exercise, 2017. He is wearing an AN/PVS-14 monocular night vision device. His SA80A2 rifle is fitted with a KITE Weapon Mounted Night Sight.
MOD photo by Stuart A Hill AMS | © Crown copyright 2017 | used under open government licence

4/73 Bty were established in 1982 to fill a mostly cold war role. In the event of a Soviet invasion of Western Europe, small teams from 4/73 Bty were to establish covert hides along expected invasion routes. Once overrun by Soviet forces, they would call in intelligence reports and artillery strikes on deep/rear elements of the enemy - e.g. lines of supply, headquarters etc.

In many ways 4/73 Bty perform a similar role to 148 Bty. One of the main difference is that 4/73 Bty lack the parachute and commando training required of 148 Bty members. 4/73 is the regular Army's equivalent of the Honourable Artillery Company (HAC), a territorial unit. In times of war, 4/73 Bty form a fourth Patrol Squadron for the HAC.

4/73 Bty, or 'Sphinx Battery' as it is otherwise known, has seen recent action in Afghanistan and Iraq. During recent operations in Afghanistan the unit switched from its traditional artillery spotting role to a reconnaissance role, patrolling in WMIK / Pinzgauer columns.

The role of Gunner Special Observer within 4/73 Bty is a specialisation which candidates choose when joining the Army. An 18 weeks 'Special Observer Patrol Course' trains candidates in the requisite skills over a series of 8 modules: