This site uses cookies. By continuing to use this site you consent to our use of cookies. more info | ok
british special forces » special air service » mobility troop
▼ share this page

Experts in the use of vehicles and heavy support weapons, the men of mobility troop provide the SAS with the ability to move around the battlefield and pack a big punch, independently of other forces.

Since their inception in the deserts of Northern Africa during World War 2, the Special Air Service has employed vehicles. Fixing multiple machine guns to jeeps, the SAS would drive onto German airfields, shoot up the parked planes and ammo stores, then retreat into the desert. Mobility troop ensures that the skills required for such operations stay intact within the squadrons.

Those members of the SAS who are assigned to Mobility Troop become masters of the various required disciplines, including :

Some of the vehicles in Mobility Troop's inventory include:

A special version of the standard army Land Rover, SAS 110s, or 'pinkies', are usually festooned with machine guns and other weapons.

update : the SAS Land Rover 110 is being phased out in favour of a new vehicle

It is now understood that for the last few years, SAS Mobility Troops have been using the Supacat HMT 400 as their primary reconnaissance / attack vehicle.

Recent press reports indicate that the SAS are using this armoured vehicle in Iraq.

A cut-down army truck, the Unimog U1100 or Acmat VLRA acts as a mothership, carrying extra fuel, water and ammunition for the other vehicles in a mobile SAS force. These support trucks will typically be armed with GPMGs, M2s or Mk19s/GMGs for defensive purposes, but would not usually be used in offensive operations. For greater protection, these support vehicles will tend to travel in the middle of SAS columns. 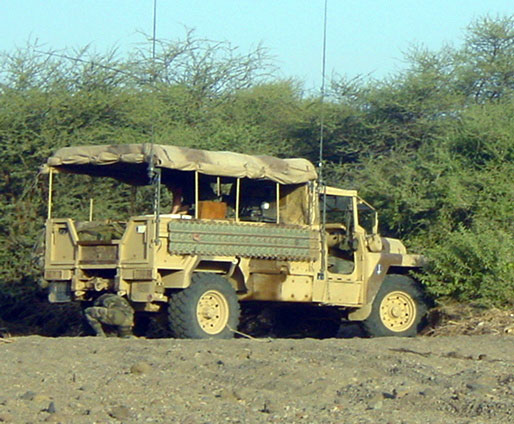 It is belived that during the 90s, the SAS purchased up to 24 ACMAT VLRA trucks for its mobility troops, largely replacing the Unimogs. (picture shows a French Foregien Legion VLRA in Djibouti.)

SAS Land Rover columns are accompanied by several motorcycle outriders. SAS motorcyclists scout ahead and around the main column, searching for the enemy and finding routes. In covert environments where radios aren't used, the outriders pass information between the wagons.

Mobility troop operate several vehicles designed for arctic conditions including snow mobiles and tracked vehicles such as the Hagglunds BV 206D. The SAS Sabre Squadrons would regularly practice in Norway as part of their NATO commitment was protecting Europe's Northern Flank against a Soviet advance.