This site uses cookies. By continuing to use this site you consent to our use of cookies. more info | ok
british special forces » royal marines » operations » operation telic
▼ share this page

Starting on 20th March 2003, 40 and 42 Commando moved into Southern Iraq to secure the oil fields and prevent Saddam from setting them on fire, as he did when withdrawing from Kuwait in 1991.

40 Cdo were helicoptered onto the Al Faw Peninsula in order to secure the oil infrastructure and sweep the area clear of enemy forces. US Navy SEALs worked closely with 40 Cdo in securing a key oil facility. 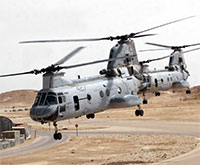 U.S. CH-46E Sea Knights like these as well as CH-53 Stallions airlifted 40 and 42 Commando onto the Al Faw Peninsula.
DoD photo by:
Sgt. Juan Vara

With the oil infrastructure secure, 40 Cdo moved to secure the rest of the peninsula. Street to street fighting ensued in towns such as Al Faw where A Coy 40 Cdo assaulted and took over the Baath party HQ building. During the clearance of the Al Faw Peninsula, 40 Cdo worked closely with British armoured units and USMC attack helicopters. 148 Bty, Royal Artillery, provided spotters to call in artillery fire.

42 Cdo were airlifted by UK and U.S. helicopters into blocking positions to the north of 40 Cdo's area of operation, with the aim of preventing Iraqi forces from moving south. A U.S. Ch-46e Sea Knight helicopter carrying Royal Marines from 42 Cdo tragically crashed during the airlift operation.

40 Cdo cleared the Iraqi side of the Shatt Al Arab waterway that acts as a border with Iran, later linking up with the BRF and Queens Dragoon Guards armour to form a blocking force against Iraq moves from Basra to the North. This blocking force would eventually call in air power against a large force of Iraqi tanks that moved South out of Basra towards their area of operations. A similar attack a few days later was defeated by British Challenger 2 tanks that had reinforced 40 Cdo.

42 Cdo moved into the port of Umm Qasr, recently cleared by US Marines. The unit carried out patrols throughout the town and port, which was soon to start taking in humanitarian aid. 42 Cdo assisted in the distribution of this aid. 42 Cdo also carried out a deliberate attack on an enemy position outside Umm Qasr.

Elements of 45 Cdo engaged in a wide range of activities. Some of these reportedly include:

539 Assault Squadron Royal Marines assisted with the UK/US amphibious landing on the Al Faw Peninsula, coming ashore on beaches scouted out by the SBS and US Navy SEALs. The unit later carried out riverine operations, supporting 42 Cdo and elements of 45 Cdo as they cleared and securing various waterways in the South of Iraq.

Marines from the Fleet Protection Group were stationed on the British frigate, HMS Richmond, and provided security for British naval assets via small boat patrols.

Op James was the codeword for the attack on Abu Al Khasib, a town south of Basrah. 40 Cdo, reinforced by L Coy, 42 Cdo, successfully attacked and defeated an Iraqi battalion and secured several routes into Basra.

By April 6th, Basra had come under British control.

In 2004, 40 Commando returned to Iraq . The unit mostly operated in the south of the country, where it helped protect oil pipelines and other infrastructure. In late October, 2004, elements of 40 Cdo deployed north to Bagdhad as part of the Black Watch Battlegroup.

Other Royal Marines elements, such as FPG and 1 AGRM provided security in and around the port of Umm Qasr. Royal Marines and Royal Navy personnel formed training teams which trained the fledgling Iraqi Riverine Patrol Service.