This site uses cookies. By continuing to use this site you consent to our use of cookies. more info | ok
british special forces » uksf aviation » commando helicopter force » lynx ah7
▼ share this page

The Lynx AH7 attack/utility helicopter was operated by the Army Air Corps (AAC), including 657 Squadron AAC of the Joint Special Forces Aviation Wing (JSFAW). It was also used by 647 Naval Air Squadron of the Royal Navy's Commando Helicopter Force (CHF).

The type was eventually replaced in CHF and AAC by the Lynx Mk9 and, later, by the Wildcat AH1.

Lynx AH7s were fitted with a suite of defensive countermeasures consisting of:

Note: the AH7s flown by 657 AAC had non-standard communications fitments, details of which remain classified.

In the attack configuration, the Lynx AH7 was armed with 8 FITOW (further Improved TOW) wire-guided missiles on 2x4-tube racks on hardpoints attached to the fuselage. The FITOW is a wire-guided anti-tank missile with a dual warhead and a top-down attack capability. The Raytheon TOW sight can also be used for reconnaissance operations.

When configured for the utlity role, the Lynx AH7 could carry up to 6 fully-equipped troops. In conventional warfare scenarious, the Lynx was often used to transport small anti-tank missile teams around the battlefield. A GPMG door gun was often mounted in one of the helicopter's cabin doors. 2 could be fitted, although doing so left little room for carrying stores or troops. 657 Sqn AAC Lynx helicopters were typically armed with 7.62mm Miniguns.

The Lynx AH7 could carry 1350kg of underslung external stores.

2 Lynx helicopters could be transported in the hold of 1 C-130J Hercules. In the build up to Operation Barras, in which 657 AAC participated, 2 of their Lynx AH7 helicopters were airlifted into Sierra Leone by a RAF Hercules. 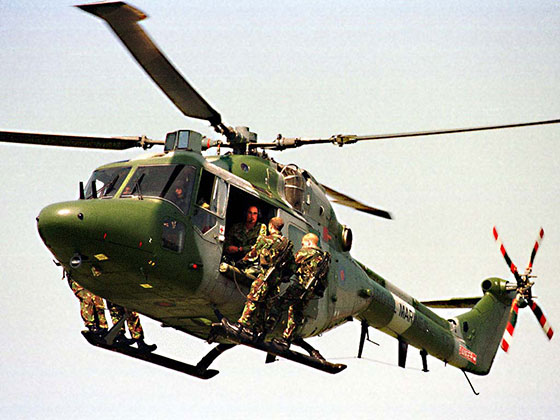 Royal Marines Commandos prepare to abseil down from a Lynx of the Commando Helicopter Force.
photo credit : US DoD